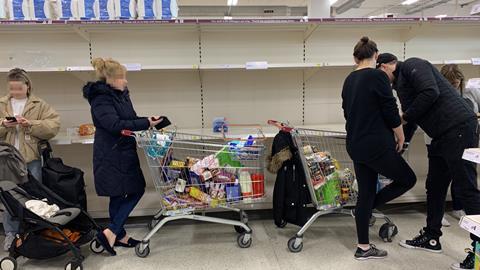 MPs have slammed the government’s slow response to the threat of Covid-19 to the food supply chain – and called for new measures to help it recover.

In a damning report, the Environment, Food and Rural Affairs Select Committee said the government had ignored warnings from the experience in other countries. It appeared “unprepared” for the possibility of food shortages in the supermarkets and the disastrous impact on hospitality businesses, the report added.

The report said the impact on food supplies would have been far worse had the industry not stepped up to fill the vacuum left by government inaction.

The EFRA Committee questioned why, given the Covid-19 outbreak was seen in other countries before reaching the UK, the government was so slow to react, though it found in many areas Defra’s response was “largely commendable”.

However, the report criticises the delays in providing guidance for key workers in the food supply sector, including guidance on the use of PPE and implementation of social distancing measures, both of which it said was left to the industry to lead.

Today’s report called on ministers to develop a major new strategy to ensure the “previously thriving” hospitality and foodservice sectors remain economically viable over the next 18 months.

It said ministers should commit long-term funding to help those suffering from hunger by continuing to fund £5m a year to FareShare’s project to redistribute otherwise wasted food from the farmgate to frontline community groups.

The committee also backed FDF CEO Ian Wright’s call for the government to set up a new cross-departmental minister for food security.

During its enquiry Wright told the committee there had been a lack of ownership of responsibility in government.

“I do think that one of the things this crisis has done is to show the absence of responsibility for hunger,” he said. “No single department has responsibility, not the committees and local government, not work and pensions, not Defra.”

The FDF and other trade groups also told how food workers had been subjected to fear and confusion because of what Wright called “unbelievable” delays in government advice over face masks and safety procedures.

“The government’s support for hospitality and foodservice businesses has not been extended to the distributors who supply them, and consequently many of these wholesalers are experiencing financial distress,” said FWD CEO James Bielby, who also gave evidence to the committee.

“With the report stating that further financial difficulties will continue for at least a year, it’s essential that the government provides a clear indication of how it will support wholesalers during the market’s slow recovery.

“FWD members also supply schools, hospitals and care homes, and while the stimulus package starting next week may help the hospitality sector, the growth will be too slow to guarantee the continuity of these vital contracts.

“The government’s response to the EFRA report must include specific support for these businesses, including the business rates relief that has been given to their customers.”

The report found that cross-border movement of food managed to keep the country well supplied, despite empty shelves in supermarkets.

But it warned that future crises that affect how much food comes into the country, such as a disorderly end to the Brexit transition period or climate change effects, would pose potentially greater challenges to food supply. There was a need to review resilience plans for the food sector, it added.

“Despite warnings from other countries, it seemed as though the government was constantly playing catch-up in trying to support the food industry during this crisis,” said Neil Parish, chair of the EFRA committee.

“Once the pandemic set in, Defra responded well. However, there were misunderstandings in government about where – and how – people were going to get their food just before and during lockdown. Rather than “panic”, it was entirely reasonable that many people would be buying much more food in shops and online.”

The committee also attacked the government for excluding convenience stores and discount retailers Aldi and Lidl from the national voucher scheme for free school meals.

“As we have seen in recent months, the UK has a large, diverse and highly resilient food supply chain – which is able to cope with unprecedented pressures,” said a government spokeswoman.

“During this time the government has worked closely with the food industry to prepare for a range of scenarios and has invested record levels of funding to help people get the food they need.

“Our Covid-19 taskforce has also brought together expertise across government to tackle the extraordinary circumstances of this pandemic and ensure those most vulnerable in our society are protected.”