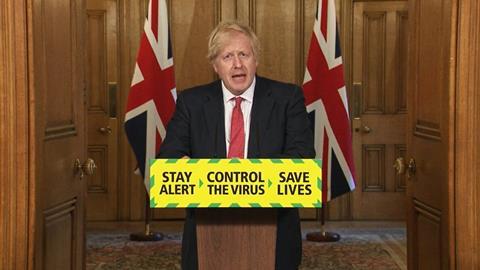 What do lockdown easing measures mean for the food & drink industry?

Plans threaten disruption and other challenges for food and drink, but the sector may also offer a blueprint for other businesses to return to work

The fact that food producers headed the list of those expected to return to work this week says a lot about the confusion surrounding PM Boris Johnson’s plans for easing lockdown.

It must have come as a particular surprise for the tens of thousands of food workers who had already braved the past 50 days of lockdown, becoming pioneers of social distancing measures in the process. Not to mention the distribution and logistics staff who kept the trucks rolling, but were also singled out in the subsequent document detailing the changes.

“The announcement was bizarre to say the least,” says one senior industry source. “The fact that food production workers are the first group named in the document is especially strange, considering for the most part they have never gone anywhere.”

However, the gradual easing of lockdown measures, starting in England this week, does at last raise the possibility of a return from the abyss for other types of retail, and a glimmer of hope for hospitality too.

It also brings risks, though, not least whether the amazingly fast adaptation of the food industry to new ways of working can be replicated by a much wider section of the economy.

“The announcement was bizarre to say the least”

There are fears, which The Grocer understands were voiced in talks between food trade bodies and government officials this week, that confusion surrounding the document and who it applies to could damage some of the progress made, rather than cement it.

Johnson’s speech came just four days after a landmark agreement between the FDF and unions Unite, Usdaw, BFAWU and GMB on worker safety, which highlighted measures food and drink companies have taken on social distancing and hygiene.

One supplier source describes it as a “miracle” that the FDF has been able to achieve any common ground at all with the unions, given the controversy over working conditions, alleged lack of PPE and social distancing that saw union walkouts at some food businesses earlier in the crisis.

But GMB national officer Eamon O’Hearn agrees the majority of food companies have stepped up to the challenge of ensuring safety can be used as a model for others to follow.

“By and large the big brand companies have realised you have to do everything you can to protect your staff and to protect your reputation,” he says. “They have done what they needed to do to get people back to work.”

Way out of the darkness: a time-frame for the industry

There are fears some of the latest advice could throw a spanner in the works.

Monday’s document confirmed, for example, that the government is asking the public to wear masks in confined spaces such as supermarkets and public transport, in line with advice in Scotland.

“What happens when food workers are travelling into work, being expected to wear masks along with other members of the public, and then when they get into their factories they are expected to take their masks off because they don’t meet safety standards?” says a supplier source.

Johnson’s advice for workers to get on their bikes and avoid public transport is also completely unrealistic, say critics, leaving food workers facing the prospect of much busier trains and buses than has been the case under lockdown.

“Food workers who have been travelling to work throughout the crisis have at least had the benefit to a certain extent of having the transport system to themselves,” says the source.

Another supplier source says a survey of his staff revealed they were more scared about using public transport than returning to work.

It’s not just manufacturing staff, but thousands of background office staff who will eventually have to come back into the fold, not to mention the commercial teams currently buying and selling products via Zoom calls.

For now, the vast majority of those staff are likely to remain working remotely, as the document advises, though food companies are increasingly making preparations for a return, especially once schools are back in operation (likely to be September for most).

“We are trialling things such as staggered starting times, reduced numbers in shift patterns, even one-way systems in the office,” says a source.

Meanwhile, the wider retail sector got a tantalising glimpse of a return to normality as the government revealed plans for “non-essential” shops to re-open in phases, from 1 June, in England at least.

The Department for Business, Energy and Industrial Strategy is to head separate taskforces looking into how these shops, which it admits “will likely have a higher risk of transmission”, can open their doors again with strict social distancing rules.

“We are trialling staggered starting times, even one-way systems”

Already the BRC has reacted angrily to speculation this move could involve small shops being the first to reopen, followed by large shopping centres in a second phase later in the year.

“We are strongly opposed to this phased approach,” says Tom Ironside, BRC director of business and regulation. “We believe reopening should be firmly based around having safe, secure locations, whatever the size of retailer.”

Like the FDF, the BRC has worked with Usdaw on joint advice on safety, most of which was reflected in government announcements this week. Ministers are expected to detail a timeframe for the reopening of wider retail next week.

The hospitality sector will have to wait longer to discover its fate, but again there were the first tentative suggestions of a rebirth. Johnson’s blueprint suggests that sometime after 4 July, and subject to all its provisos on the spread of the disease being curtailed, foodservice providers, pubs and hotels could reopen, so long as they meet ‘Covid-19 secure’ guidelines.

Such is the controversy surrounding the timing of the next phase, and fears over a second wave of the virus, the PM’s plans are already threatening a damaging split with the other UK governments, however.

The division does not stop at disdain for Johnson’s new ‘Stay Alert’ logo, described as “meaningless” by Scotland’s first minister Nicola Sturgeon. From the start of the outbreak, the Scottish government has taken a different approach to the food industry, erring far more on the side of safety first.

As The Grocer has previously reported, dozens of factories north of the border closed amid claims from MSPs they were unnecessarily putting non-essential workers at risk. Significantly there has been no union agreement north of the border and Scotland, despite being famous as one of the UK’s food-producing heartlands, has absenteeism rates in the food industry of around 12% - at least 3ppts higher than in England - with almost 15% of companies having stopped working since the crisis began.

Yet the way the food and drink industry has responded in the opening 50 days of lockdown at least provides ministers with a model of how the wider economy can adapt.

The empty shelves and panic buying that bordered on chaos in stores in mid-March has, by mid-May, largely been replaced by normal availability. Social distancing measures have become accepted practice and, for most at least, food shortages appear no longer a real threat.

Crippled online delivery services are even starting to show signs of getting back to normal, and suppliers have responded to the crisis with lightning-fast adjustments to their ranges.

All of which offers hope that the UK can gradually come back to some sort of life worth living - so long as wider industry shows the same pragmatism, innovative thinking and co-operation as food and drink - and we all stay “alert”.