Iceland expands its DRS trial to stores across the UK 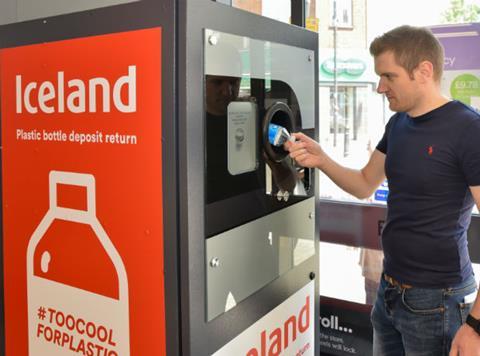 Iceland is ramping up its trial of the Deposit Return Scheme (DRS) system as it steps up its battle against plastic.

Having unveiled the first reverse vending machine in a UK supermarket, in London’s Fulham, last month, Iceland is set to install three more, including the first in action for Scotland and Wales.

The second machine opened for use in a Wolverhampton store today, with a further two to be installed at Iceland’s Musselburgh branch, near Edinburgh, this week and in Mold, North Wales, later in the month.

Iceland has said the six-month trials are designed to help the company better understand consumer perceptions and appetite for plastics recycling technology across the UK.

“Today’s announcement is a further step in our commitment to tackling the issue of plastic pollution globally, following our pledge to eliminate plastic packaging from all of our own label products by the end of 2023,” said Iceland Foods group MD Richard Walker. “While our initial trial in London has been a success, we feel it is important to include insights from consumers elsewhere in the UK to get a better understanding of the challenges we might face.

“At least one third of plastics, much of this relating to packaging, is single use and then discarded - plastic bottles are a prime example of this. Through our trials, we hope to understand how to make it easier for people to act in an environmentally conscious way while tackling the threat of the millions of plastic bottles that go unrecycled every day.”