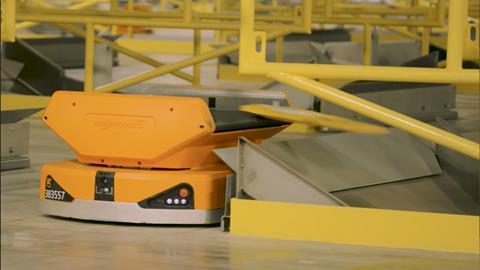 Amazon has developed new warehouse robots that move packages from human workers to chutes on their way to being delivered, replacing conveyor belts.

Around 800 of the suitcase-sized Pegasus robots are in use in Denver, and there are plans to introduce them to other US Amazon warehouses this year.

On-board cameras sense obstacles as they follow a programmed route to one of hundreds of chutes, where a small conveyor belt on top of the robot will tip the package off. Human ‘flow control specialists’ monitor robot traffic.

An Amazon blog on the robots said: ‘Resembling an orange nightstand on wheels, the two-feet-high, three-feet-wide Pegasus drive is Amazon’s newest robot, designed to create greater efficiency in its sortation process so customers can receive their orders even faster. They represent Amazon’s highest ever drive density in its network, requiring the need for robot traffic control.’