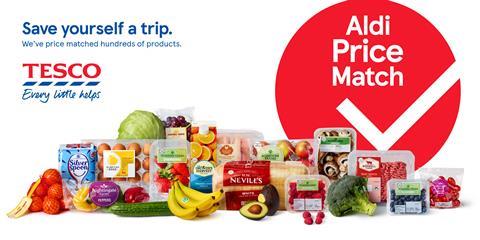 Tesco has been pulling own-label products out of its Aldi Price Match campaign in order to put up the price, analysis for The Grocer has revealed.

At least 18 Tesco own-label lines have fallen out of its campaign since the end of March.

Examples include six 200g varieties of Tesco chilled dips, matched at 79p on 20 April but this week out of the campaign and selling for £1.20, while Aldi’s equivalents remained at the lower price. Tesco is offering a Clubcard deal on the dips of two for £2.

Tesco’s Stockwell & Co strawberry jam, which was Aldi matched at 28p on 20 April for a 454g jar, was this week out of the campaign and selling for 31p. Stockwell & Co marmalade was also out. It was 27p in April and has since risen to 30p.

Six-packs of Tesco pitta bread have been dropped from the campaign and hiked in price since April from 35p to 45p, according to analysis by IPLC partner Paul Stainton.

Tesco’s Eastman’s corned beef 150g has come off the Aldi Price Match list and risen from £1.11 to £1.25 since April. It was out of stock on Tesco.com this week.

However, in a sign of the cost pressures affecting both retailers, Aldi also continues to raise the price of some matched products before Tesco follows suit, a pattern first revealed by The Grocer in February.

Lines of pizza, cherry bakewells and naan bread have all risen in price at Aldi in recent weeks ahead of similar increases by Tesco on its matched products. Aldi Everyday Essentials Cheese & Tomato Pizza 114g went up from 49p to 55p between 20 April and 5 May; Tesco Hearty Food Company 114g was still 49p on 6 May, and has gone up to 55p since.

A six-pack of Aldi Holly Lane Cherry Bakewells went from 75p to 79p between 20 April and 5 May, while Tesco’s own label six-pack was still 75p this week.

Tesco had 398 own-label lines in its campaign on 28 March, a number that has since fallen to 380. Its full list of price-matched products has risen from 639 to 654, according to Stainton, thanks to the addition of more brands, a selection that changes frequently against Aldi Specialbuys.

Tesco checks and potentially changes prices of the products twice weekly, removing lines that are out of stock at either supermarket.

“We know that now, more than ever, customers want great value when they do their food shop,” said a Tesco spokesman. “That’s why we are committed to providing great value for our customers, whether it’s promising low everyday prices on 1,600 staples, price-matching 650 basics to Aldi prices, or offering exclusive deals and rewards through Clubcard prices.”

An Aldi spokesman said: “Aldi is the UK’s cheapest supermarket and will continue to offer the lowest grocery prices in Britain. The most recent Grocer 33 basket comparison found that Tesco was 16% more expensive than Aldi and our customers know that those differences add up to big savings every time they shop with us.

“While the prices of certain products will change from time to time, our customers will always pay less at Aldi than other supermarkets.”

Stainton, who regularly monitors the price of a basket of 80 products at both supermarkets, and also at Sainsbury’s, in its Aldi price match campaign, also noted a “staggering” level of increases across the board.

“Across my basket, all three retailers have increased prices since the beginning of the year on at least 45% of the items,” he said.

Notable examples included salted butter. Aldi’s 250g Cowbelle version and Tesco and Sainsbury’s price-matched products were all £1.48 in March. This week, Aldi’s and Tesco’s were both £1.75 while Sainsbury’s was £1.90.