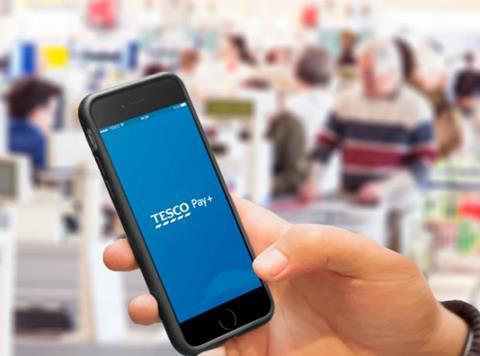 Tesco Pay+, formerly known as PayQuiq, will collect an additional Clubcard point for every £4 spent in store at Tesco or at Tesco petrol stations until 28 February

Tesco is trying to ramp up the number of customers signed up to its Clubcard payment app, a year after its UK-wide rollout.

A new promotion means shoppers using Tesco Pay+ will collect an additional Clubcard point for every £4 spent in store at Tesco or at Tesco petrol stations until 28 February, on top of the point per pound they normally get.

It is 12 months since the nationwide rollout of the app, formally known as PayQwig, which was rebranded in September last year under the new name.

The app allows customers using either Android and iOS smartphones to pay and collect Clubcard points with one scan of their phone, up to a single transaction limit of £250.

Tesco said hundreds of thousands of customers had used Tesco Pay+ throughout the Christmas period with more than eight million transactions across the Tesco estate.

The move to attract more users of the app comes with Tesco promising to provide more rewards and interactivity with the bulk of Clubcard users. The app is seen as essential for targeted rewards as well as innovation in the loyalty scheme.

Last week Tesco was embarrassingly forced to delay controversial changes to its Clubcard rewards scheme, reducing the redemptions customers could use with its commercial partners, after a backlash from customers angry at the move.

But Tesco is determined to simplify Clubcard following last July’s launch of the new contactless version and its decision last year to scrap its regular Clubcard Boost events.

Mark Loch, digital wallet and group payments strategy director, said: “We know that customers love Tesco Pay+ as it offers them a quick and easy way to pay for groceries or petrol. I am delighted that we are also continuing our commitment to customer reward by ensuring that customers will collect one extra Clubcard point for every £4 they spend in Tesco until 28 February.”