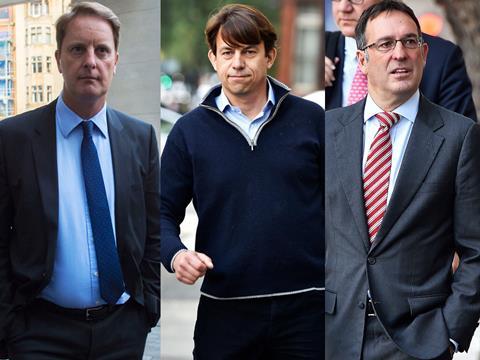 John Scouler (left), Carl Rogberg (centre) and Chris Bush (right) are alleged to have been involved in a “white-collar crime” plot

Tesco employees were “bullied” and coerced into fixing the books in order to hit its profit targets, a court was told today.

The prosecution in the case of three executives charged with masterminding the fraud plot, claimed staff in “relatively subordinate positions” presented false figures in order to meet the profit targets set by the supermarket giant.

Sasha Wass QC said the case, “boiled down in its essence”, amounted to “cooking the books or what lawyers call false accounting”.

She added: “The three defendants who are on trial in this case are not the footsoldiers who misconducted themselves. The defendants in this case are the generals - those who are in positions of trust and who were paid huge compensation packages in order to safeguard the financial health of Tesco.

“These defendants encouraged the manipulation of profits and indeed pressurised others working under their control to misconduct themselves in such a way that the stock market was ultimately misled.”

Wass said those who objected to the practice within the organisation were bullied and forced to continue.

Carl Rogberg, 50, Chris Bush, 51, and John Scouler, 49, are alleged to have been involved in a “white-collar crime” plot in which they failed to correct inaccurately recorded income figures that were published to auditors, other employees and the wider market.

The supermarket’s former finance chief, managing director and food commercial head, who are charged with fraud by abuse of position and false accounting from February to September 2014, were investigated after Tesco was found to have inflated its profits.

The court heard that Rogberg, who was ‘directly responsible’ for authorising the falsified figures, received a remuneration package of more than £1m in 2014.

Bush, who was in charge of the performance and “integrity” of Tesco at the time, received nearly £3m that year, and Scouler, who allegedly directed those beneath him to falsify income figures, received around £1.5m.

Wass said Tesco was operating in “challenging trading conditions” and “failure was not looked on kindly”.

“Each defendant would have had a very personal interest in keeping the share value of the company high, because a lot of their remuneration package included shares,” she said.

“And, of course, any failure to meet targets could have resulted in not only the share prices going down, but indeed the credit rating of the company being downgraded.” 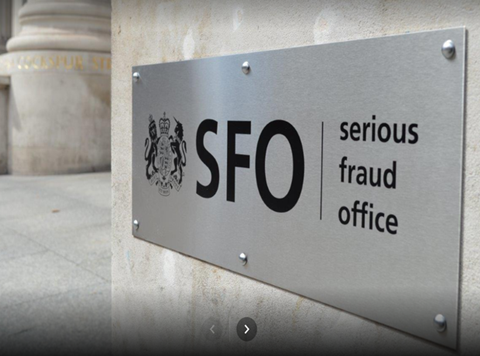 Wass said figures were “window-dressed” to make it look as if targets were being met.

She told the jury about the practice of “pulling forward”, which she said was “Tesco shorthand” for bringing forward income from the future to artificially inflate the figures of the present.

“It really should have been obvious to anybody, let alone a highly responsible and highly paid executive, that if income is not guaranteed and it hasn’t been earned, it shouldn’t be included in the current year accounts.

“The prosecution say that not only is the recording of income that doesn’t exist dishonest, but you can see that if you are going to include the first month of next year into your earnings you are going to start the following year with a month short.”

Wass said the trial would hear from witnesses working within Tesco that ‘pulling forward’ income in the way that was being done at the supermarket was something they had never come across in any other organisation they had worked in.

“And some individuals that you will hear from felt so compromised by what they were being asked to do that, they felt their professional integrity was being put at risk and they resigned from their prestigious jobs rather than remain involved,” she said.

Wass highlighted the peril of the practice, saying: “You can see that the problem, as time passes, just spirals out of control.”

The fraud came to light due to the contents of an “explosive” document called “the legacy paper”, which was put together “almost secretly” by two employees who worked underneath Rogberg, the court heard.

Wass said: “It was the legacy paper that exposed and identified the size of the hole in the accounts, or the extent to which it had reached by September of 2014.”

The court heard the paper, which explained there was a £246 million hole in the accounts, was “like a hand grenade” thrown into the first statement made by Tesco, exposing it as false.

Wass said the defendants’ reaction when shown the document was “the clearest indication of their guilt”, adding: “They were not shocked at all. They knew that the hole in the accounts was out of control.”

She said Scouler tried to get one of the employees who helped compile it to “tone down” the legacy paper before anyone else saw it.

Pointing to the “unjustifiable” gap between the first and second Tesco statements, Wass told the jury: “We will ask you to draw the inference - that is to say, come to the common sense conclusion - that there has been such a colossal fraud, such a huge falsification of these accounts, and that it was the defendants who were the controlling minds behind it.”

The trial will continue on Monday afternoon.