10 of the most memorable yoghurt adverts throughout the ages 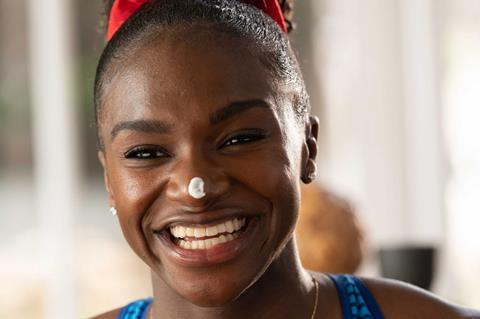 You’d have thought after all these years, Müller would have found some less clumsy celebs to appear in its yoghurt campaigns. First came Nicole Scherzinger, spilling her Simply Bliss mousse as she tumbled down the steps of Mount Olympus. Now in the dairy giant’s latest ad – for its Icelandic-style Skyr Corners – it’s Olympian Dina Asher-Smith that ends up with a Müllerlicious blob on her nose.

It’s not really clumsiness, of course, but a motif that serves to make Müller’s ads that bit more memorable. And speaking of unforgettable yoghurt ads, to mark this year’s The Dairymen special, we’ve delved into the archives to find 10 of the best. Here they are:

In the early 2000s, a little girl in a purple pinafore became the poster child for Petit Filous, Yoplait’s brand of fruity fromage frais. In a series of quaint ads set in a rural French village, the girl demonstrated how the calcium in the yoghurts could ‘make your bones grow strongerer’, by cartwheeling though fields, going on adventures and – in one nostalgic ad – winning back her friend’s marbles by beating the local bully in an arm-wrestle.

Brace yourselves, ladies. Because this ad is the Baywatch of dairy advertising, and Prize yoghurt is David Hasselhoff. The 1980s ad from St Ivel sees some female pieces of fruit sunbathing on a beach while a group of weedy ‘thin yoghurts’ try in vain to impress them. Then enter The Prize Guys, the thickest, fruitiest yoghurts around. “I’d never seen such body in a yoghurt before”, reminisces a swooning pineapple ring, who vows never to look at a thin yoghurt again. Dairy has never been so emasculating.

Described in the YouTube comments as “a work of art”, “beautiful”, “calming and peaceful”, this poetic campain for Fage Total is a celebration of plainness. By combining artistic visuals of splashing milk and a stirring narration by actor Willem Dafoe, it cuts through the noise to demonstrate how ‘extraordinary’ a plain product can be. And consumers certainly found it memorable: “It’s kind of criminal how often I think about these commercials”, one commenter wrote.

Set in a candlelit medieval castle, this 1986 ad for Yoplait sees a royal taster checking the king’s food for poison. After sampling a slime-green stew and something containing fish heads, it’s unsurprising that he makes the most out of the Petit Filous he is presented with next. “You’ll be fine with an apple”, he tells the king as he tucks in to the yoghurts himself.

5. I Got Life, Müller Corner

This catchy campaign uses the tune of Nina Simone’s Ain’t Got No, I Got Life to highlight Müller Corner’s many varieties. A happy bunch of yoghurt-lovers are seen frolicking through fields and singing about their favourite flavours, from crunchy biscuit to berries & cherries. It’s a feel-good ad as a whole, but worth watching just for the adorable little boy and his blueberries. Aww.

Only in a 1970s yoghurt advert would you find a family with so much energy first thing in the morning. After throwing a few pots of Ski at each other over breakfast, the blonde and beautiful bunch in this campaign dress in matching outfits and head out for a picnic lunch of – you’ve guessed it – more Ski. It’s just one in a series of equally exuberant ads for ‘the full of fitness food’.

Cat owners across the country will surely identify with this Onken campaign, which first hit screens last year. It sees yoghurt-lover Alan tucking in to a pot of Onken when he is interrupted by his talking moggy, who thanks Alan for doing ‘an alright job’ of looking after him. Featuring the excellent voice of Matt King – aka Peep Show’s Super Hans – as the cat, the ad cleverly equates the taste of Onken to the slightest bit of appreciation from a feline friend. If that’s not inner happiness, then what is?

We like to think A-ha were inspired to make their famous Take On Me video after watching this ad for Wall’s Fresto yoghurt. The 1967 campaign sees a rather mechanical hand-drawn boy making Fresto by adding ‘lots and lots of fruit’ to a churn of ‘fresh country milk’. The staring-into-your-soul look he gives at the end may be slightly creepy, but it’s charming all the same.

9. Feeling Good From Within, Activia

Who better to promote a yoghurt that makes you feel better from the inside out than the king of body positivity, Gok Wan? In a series of ads from the 2010s, the style guru convincingly extolled the virtues of Activia’s gut-friendly products, alongside a diverse cast of happy women. Not only were the ads instantly recognisable for their soundtrack – The Spencer Davis Group’s Gimme Some Lovin’ – but enlisting the trusted and lovable presenter at the height of his How To Look Good Naked fame was a smart move, too.

Ok, so this one isn’t just about yoghurt. But how could we overlook Yeo Valley’s answer to Westlife and their touching tribute to ‘pure and natural farming’? This catchy 2011 campaign – or rather, music video – sees dairy-loving boyband The Churned sing their hearts out while feeding calves, driving tractors and munching on big pots of yoghurt. Not only does it boast witty lyrics, a dance routine and the kind of farmers you’d only find in a calendar, it drives home an important message about respecting nature in agriculture. It’s a hit.

We compiled this list to celebrate the upcoming launch of The Dairymen - our annual guide to the dairy industry packed with insight and analysis on all the latest trends. To read the report, subscribe here.