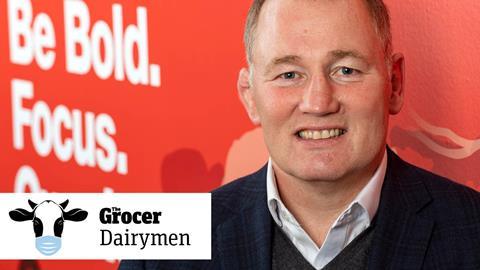 Big Interview: How Jon Jenkins picked up the ball at Müller

It’s time to move on from the work of Darwin, insists Müller Milk & Ingredients CEO Jon Jenkins. No, he’s not about to speculate on humankind’s next stage of evolution. He’s talking about Project Darwin, the savage cost-cutting exercise designed to save the struggling supplier £100m.

It was launched last spring by Jenkins’ predecessor Patrick Müller, after he claimed MMI’s business model didn’t “allow us to make a profit”. Indeed, the company reported losses of more than £200m in total for 2017 and 2018 – underlining the fact that not even global dairy giants were immune to the litany of financial woes suffered by the liquid milk sector.

This January, Patrick Müller hailed the success of Darwin as he stepped down. But now Jenkins is determined to take a different tack, having “drawn a line under” the project. He promises its upcoming set of results will be very different as it aims to become “Britain’s leading private-label dairy producer”.

Of course, Jenkins hasn’t had an easy start to the role. No sooner had the fmcg veteran got his feet under the table than Covid-19 hit. He admits it was “obviously a massive distraction from the job of work I came in to do”.

“It’s been a real rollercoaster,” he says. “We’ve obviously been super busy keeping supplies on shelf, while the main concern was ensuring the 4,500 people who work for us were safe. But the team spirit has also been brilliant, everybody pulled together and saw the bigger picture. The great news is we carried on with the turnaround plans, and the business is now in a really stable position where we can plan for the future with a lot of confidence.”

Juggling those two issues is clearly hard work. But luckily for Jenkins, hard work is something he has become accustomed to in his career. For a decade between the mid-1980s and mid-90s, he combined a burgeoning career for Mars’ food division with a second career as a back-row forward for (then amateur) rugby union sides such as Northampton and Rugby.

Although a “knackered knee” put paid to his sporting ambitions, playing rugger was ideal preparation for a career in food and drink, he claims. “It bred in me a real passion to bring the best out of teams and not to have hierarchies, so that everybody feels they can make a contribution.”

Indeed, rugby union has similarities with leading a major business in a pandemic. Namely, it’s “about collective effort and collective endeavour. I’ve never lost that, and it’s part of who I am,” he says.

If rugby was a real passion for Jenkins, so too was fmcg. He was “always interested” in the industry, influenced as a boy in no small part by his father’s job at Pedigree Petfoods. Indeed, after joining Mars as a university graduate, he “never looked back”.

He left the company in 1999 with the title of business unit head for grocery. After spells at Bulmers and Halewood, he joined Associated British Foods in 2004 – becoming Twinings MD four years later and driving the tea brand to the number one spot in grocery.

In 2015, he moved across ABF to become Allied Bakeries CEO. It was here he proved his ability to deal with tough situations. His first task was a brutal cost-cutting exercise that saw 32 senior roles culled amid falling bread sales generally, as well as the delisting of Kingsmill by Tesco (which soon made a U-turn on its decision).

In June 2019, Jenkins stepped down as Allied chief to pursue other opportunities within ABF – amid “challenging market conditions” that led to a management shake-up.

It was in his final few months at the fmcg giant that the opportunity came up at MMI. Jenkins jumped at the chance to take the reins from the soon-to-depart Patrick Müller. The dairy supplier “was always one of the businesses I was interested in if I wanted to do something outside of ABF”, Jenkins recalls. “I remember reading in The Grocer about Project Darwin and thinking, that’s a pretty meaty challenge.”

Plus, it wasn’t altogether unfamiliar territory. Dairy shares similarities with bakery, he believes. “They are both right in the middle of the grocery marketplace as two staples.” They also both operate on wafer-thin margins. So when the call came from MMI, “it felt a bit serendipitous”, says Jenkins. “The challenge of supporting an important part of the food supply chain to get its house in order and have a sustainable future looked really attractive.”

“When you are staring at the losses we were experiencing, everything gets put on the table”

That has required some difficult decisions. As part of its turnaround plans, MMI has closed three sites and lost of 10% of its workforce. The dairy giant has also engaged in “an extended and difficult programme of work” with its retail partners as part of a widespread renegotiation of terms, Jenkins adds.

He is determined to focus on the positives, though. MMI now has “sustainable relationships” with the big supermarkets and is “in a good place”, he insists. “I suspect the rest of the industry will have to do something similar. When you are staring at the losses we were experiencing, everything gets put on the table, and we’ve taken a long hard look at the organisation.”

Part of MMI’s shift towards efficiency saw sister business Müller Yoghurt & Desserts take over the running of the Frijj flavoured milk brand this summer. That leaves MMI almost entirely focused on maintaining its own-label relationships with the major retailers – a move that will allow it to be more “single-minded” about its core objective of becoming “Britain’s leading private-label dairy producer”.

“The job you do as a branded supplier is different from the job you do as a private-label supplier, particularly in our market,” Jenkins explains. “Designing supply chains to enable your customer to get the best advantage is an absolutely all-consuming activity. To run a branded agenda at the same time as that means you end up compromising.”

The business intends to realise its ambition by becoming the “cost leader in the white milk market”. It wants customers to feel MMI is “an extension of their business” while it grows added value areas such as filtered milk, which experienced a big sales boost during lockdown. It also sees opportunities in cream and butter, driven by the boom in home baking.

Essentially, the pandemic has shown MMI is now a “resilient supplier that has a sustainable business model”, Jenkins says. That puts it in a stronger position ahead of a Covid-driven recession, during which margins will be tight.

It will make the need to “understand your supply chain and provide efficient solutions for customers an ongoing requirement”, he warns. And that is one thing he is determined to ensure as CEO: “I’m never going to put that particular ball down.”