2
Cellular milk: will future dairy come from a lab? 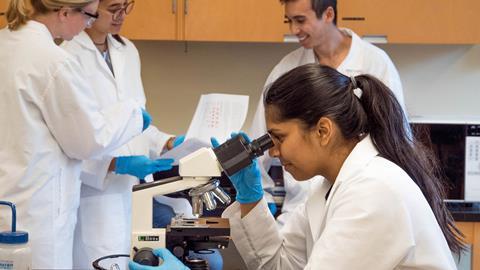 Cellular milk: will future dairy come from a lab?

Lab-grown or cellular milk has been touted as the next big thing for several years. Now, the concept is a step closer to reality.

An increasing number of businesses are working to create milk from cultured cells. And tech firms such as California’s Perfect Day are blazing a trail.

The business uses fungi to make milk proteins that are “molecularly identical” to those in cows milk, it claims.

The proteins are already on sale – albeit in Perfect Day’s Brave Robot ice cream, which has been in more than 5,000 US stores since last year.

Its Mylkcubator will host 10 startups, entrepreneurs and scientific projects over the next six months, covering cell-based, fermentation-based and applied technologies.

It hopes to present its cellular milk concepts to investors by the end of the year, with Pascual seeing “large potential” in cow-free technologies.

Even plant-based is getting in on the lab-grown act.

Danone, for instance, hinted at a shift to new ingredients, production methods and an evolution in its alt-milk offer this July, as it announced plans to move to a “plant-based 2.0” strategy. This would challenge the use of ingredients such as almond, oat and soy, it claimed.

With an even greater emphasis on taste, Danone says it will launch this “new dairy-like technology” under its Silk NextMilk, So Delicious Wondermilk and Alpro Not Milk brands later this year.

This article is part of The Dairymen - our annual guide to the dairy industry that’s packed with insight and analysis on all the latest trends. To read the full report, subscribe here