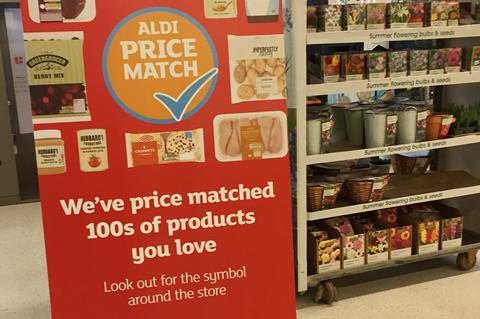 A year on from the UK’s first national lockdown, supermarkets have been transformed by the coronavirus pandemic with social distancing, customer limits, face coverings and safety screens. But as we reflect on those events of a year ago, this week there was one similar to the situation from last March: poor availability.

In a low-scoring week, only one supermarket managed to avoid any out-of-stocks, and that was the retailer at the bottom of the pile. Our winner was Sainsbury’s in Otley, which scored 73 – despite two out-of-stocks – to take the store of the week award. Coincidentally, that was a gong it last received exactly a year ago at the height of panic-buying.

Our shopper was impressed with how well organised the entrance was, with plenty of antibacterial spray and towels for trolleys as well as hand sanitiser. There was also a greeter to manage customer numbers, though there was no queue at this time on Saturday evening.

Staff were consistently excellent, including one team member who gave our shopper precise directions to an item she needed and checked up on her later to make sure she had found it. The checkout operator was also friendly and efficient.

The only area where the store lost marks was availability, with two out-of-stocks and three not-stocked items.

Runner-up Tesco Shrewsbury also had two out-of-stock lines, which affected its overall performance, with a score of 68.

Our shopper was impressed by the cleanliness of the store and how easy it was to navigate with particularly wide aisles. Staff were generally helpful and friendly – particularly one employee who helped our shopper on two occasions.

Waitrose in Alderley Edge scored top marks for customer service but none for availability. The smallish supermarket didn’t stock eight of the items on our list and was also out of stock on four items.

In terms of service, our shopper was impressed by staff, who she named as the standout feature of the store. She said they were “genuinely friendly and seemed to have a very nice rapport with one another”.

Again, one staff member stood out – taking our shopper to an item, looking up information on another line and checking in later to see if our shopper needed any further assistance.

There were only four points separating Waitrose and fourth-placed Morrisons in Liskeard. Here too, availability was an issue, with two out-of-stocks and one not-stocked product.

The Morrisons branch was untidy in places, with cardboard boxes discarded in some aisles, an unattended cleaning bucket and mop in one aisle and a ladder left in another.

Staff were a mixed bag: only one of five team members our shopper approached took him to the item he was after, while the others simply pointed and offered vague directions.

Just one not-stocked item prevented our shopper at Asda Waterlooville picking up a full basket – but the positive news ends there, as the store scored just 44 points.

Our shopper spotted litter in the car park and unfortunately the untidiness continued in-store. Our shopper described the shelves as messy with products in the wrong places.

There appeared to be an obvious staff shortage and this was confirmed when our shopper overheard the checkout operator tell a fellow customer there had been some staff sickness. There were only two open checkouts, which led to long queues to pay.