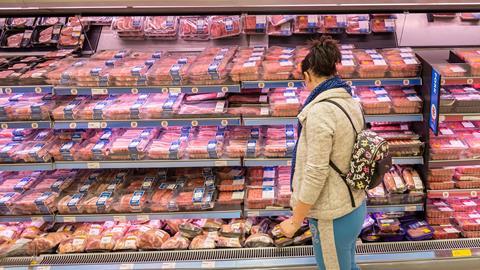 A meat tax isn’t reasonable now, but the conversation is far from over

It’s easy to come up with new taxes. How about, for instance, a tax on retail billionaires’ excessively phallic space rockets?

OK, that’s a far-out idea (as Jeff Bezos will no doubt agree). But wild notions about taxation seem to be a bit of a trend at the moment. Take today’s story about Ethan Brown. The founder of Silicon Valley sensation Beyond Meat has proposed a “pigouvian” tax on meat consumption. It would encourage more people to swap animal products for plant-based alternatives, thereby benefiting the planet, he told the BBC.

To a degree, it makes sense for him to say that. After all, sustainability is part of Beyond Meat’s altruistic mission. “By shifting from animal to plant-based meat, we can positively impact four growing global issues: human health, climate change, constraints on natural resources, and animal welfare,” its website states.

But Brown – a man estimated to be worth more than $200m – doesn’t seem to have considered the inequity of his idea. As with VAT on foods including chocolate biscuits, a tax on meat would be regressive. That is, low-income families would be forced to pay the same as wealthier households. And they would have little alternative. Because to switch to meat alternatives could be even costlier.

The fact is, hi-tech meat alternatives – as opposed to humble veggie options such as bean burgers – are still pricey. That won’t always be the case at Beyond, Brown has promised. “As we scale, we’ll begin to be able to under-price animal protein,” he told the Beeb. “If you look at our facilities, and you look at the facilities of say, some of our plant or animal-based competitors, right, we’re still a very small company [but] that’s going to change.”

It’s a point that was similarly hammered home last year by the brand’s chief growth officer Chuck Muth in an interview with The Grocer. He pointed to its production site in the Netherlands as a means of making Beyond’s burgers, bangers and mince – previously imported from the US – more affordable in the UK.

Affordability may also become more feasible amid the sort of investor interest in plant-based innovation that, for instance, saw the supplier’s initial IPO valuation of $1.2bn (£922m) jump to $1.5bn (£1.2bn) ahead of its flotation in 2019. Brown also believes the tax on meat consumption itself could go some way to levelling the pricing playing field, by “helping emerging markets to invest in plant-based protein”, the BBC reports.

His idea isn’t a new one, or totally unlikely. Henry Dimbleby has only just called for sweeping taxes on processed and HFSS foods, which could include meat products, in the second part of the National Food Strategy.

So, as it becomes clearer and clearer that meat consumption puts strain on the planet and people’s health, a meat tax can’t be ruled out for the future. But right now – especially as recession tightens – it could well have unintended consequences.