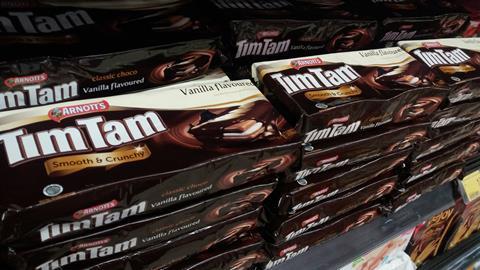 How long can the British people be deprived of the opportunity to have Arnott’s Tim Tams at a reasonable price?

It’s a question no one knew they needed the answer to until PM Boris Johnson appeared in a video yesterday wafting a packet of the Australian biscuits (in a scene reminiscent of his infamous kipper moment) to trumpet the benefits of a UK-Australia free trade deal.

“Let’s get this free trade agreement done,” he enthused. Kinda like we got Brexit done, I guess.

By focusing on Tim Tams and Vegemite, rather than Australia’s major agricultural exports – such as sheepmeat and beef – Johnson swerved the big elephant in the room when it comes to future global free trade deals. Food standards.

Australia might not be looking to send chlorinated chicken our way, but the country still uses farming practices that would be illegal under current UK laws.

Routine short tail docking in sheep (where the majority of the tail is removed) and mulesing (a practice described by animal welfare campaigners as ‘barbaric’) are still permitted, for example, as is the use of antibiotics as a growth promoter.

The country is likely to push for a more generous sheepmeat quota under the terms of a new free trade deal, experts have warned. And it’s already rumoured to have joined the US in pressing for the UK to accept imports of hormone-treated beef.

Addressing these issues would have, admittedly, made for less upbeat viewing. But you’ve got to ask how much longer Johnson can dodge the debate on food standards.

His latest YouTube appearance came as an NFU petition to maintain UK food standards passed the million-signature mark. According to an industry source, 80,000 letters have been written to MPs in the past fortnight.

At the same time, a YouGov survey released yesterday found eight in 10 Brits are opposed to allowing imports of chlorinated chicken into the UK, while 75% think it would be unacceptable to allow imports of dairy products that have been treated with antibiotics.

Perhaps the PM is right, and Brits really are craving affordable Tim Tams. But I’d wager that if you asked them, most wouldn’t be willing to trade our world-leading food standards for a packet of biscuits.