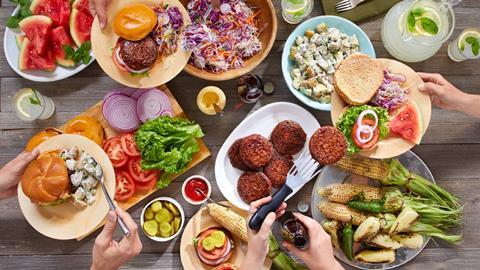 Beyond Meat and PepsiCo’s Planet Partnership has big mutual benefits

Mutualism. It’s form of symbiosis – one in which both parties benefit.

The classic example is bees and flowers: the insects gather nectar to make into food, while inadvertently spreading pollen that fertilises the plants. Then there’s the mutually beneficial relationship humans enjoy with the bacteria in our digestive tract. The micro-organisms aid digestion and gut health as they’re nourished by the food we eat.

Turning from nature to the food and drink industry, a fine illustration of mutualism has been unveiled. It’s the tie-up between PepsiCo and Beyond Meat. The two parties this week announced a joint venture to capitalise on the booming meat alternatives market.

It’ll be managed through The Planet Partnership, a new company that will combine Pepsi’s marketing expertise and commercial heft with Beyond’s plant protein savvy. The financial terms are undisclosed but no doubt substantial.

The deal, which will lead to a pipeline of vegan food and drink innovation, makes enormous sense for both companies. For one thing, they’re both broadening their portfolios and appeal. Beyond will make its debut in beverages and (probably) snacks, while Pepsi will go, er, beyond such products.

The ambitious Beyond will benefit from Pepsi’s insight, influence and buying power, allowing it to safeguard supply of ingredients in an increasingly crowded meat alternatives sector. The Californian tech startup will also be able to further accelerate its capabilities of getting to market – something it’s been seeking to do as it’s quickly expanded around the globe. It means Beyond Meat will likely to continue to outpace its rival Impossible Foods, which is still figuring out how to go worldwide.

And Pepsi will be able to bathe in plant-based’s health halo and supposed eco-cred – giving the company a serious step up in its ambition to offer more sustainable and better-for-you options.

Plus, the soft drinks behemoth can surely seem a little cooler from having the oh-so-trendy Beyond as wingman. However, a word of warning for both parties: the joint venture may well ensure the $11.7bn startup’s growth and future success, but it may also disappoint a few hipster investors. By collaborating with ‘The Man’, Beyond could lose its edgy image.

That said, CEO Ethan Brown probably won’t lose much sleep over it.