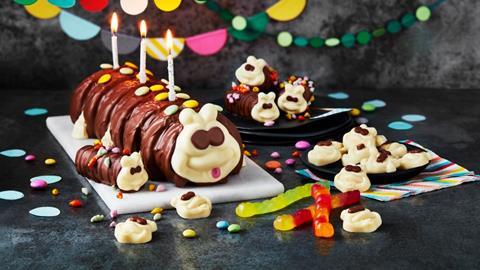 Who would have thought Aldi would sail dangerously close to the winds of intellectual property law with a product very reminiscent of someone else’s?

The whole world, it appears. Aldi has been having a field day making fun of M&S’s caterpillar cake High Court claim with its #FreeCuthbert Tweets. No-one seems in the least bit shocked at the alleged ‘trademark infringement’. Instead, they’re lapping up the suggestion that ‘Marks & Snitches’, as Aldi put it, has gone a bit OTT in its reaction.

After all, it’s not the first time Aldi has copied a popular product. Sometimes, it hasn’t paid off. In 2019, the discounter delisted its Moo Gourmet Yoghurt after Collective co-founder Amelia Harvey claimed the products looked too similar to the brand’s. That followed a similar row between sausage brand Heck and Aldi the previous year.

Other times, it has simply enjoyed a bit of free publicity. Last year, a spat with BrewDog ended with a collaborative product going on sale in Aldi stores.

The latest dispute seems, if anything, less serious than these examples, given that Aldi is one of several retailers selling what is patently their own version of M&S’s Colin the Caterpillar. Tesco has Curly, Sainsbury’s has Wiggles, Asda has Clyde, Morrisons has Morris and Waitrose has Cecil.

So why has M&S singled out Aldi’s Cuthbert who, in any event, is seasonal and has not been on sale since February, according to the discounter? And what arguments is it likely to use?

In its announcement, M&S says Cuthbert “infringes its trademarks and amounts to passing off due to its substantial similarity with the iconic M&S Colin the Caterpillar”. For that reason, it wants Cuthbert removed from sale and for Aldi to agree not to sell “anything similar in the future”.

But it could have trouble getting that through the courts. M&S’s announcement of the action last week is understood to have come as news to Aldi, a fact that may not bode favourably for its case. “The courts take a pretty dim view when people file actions without any discussion ahead of that,” says Andy King, partner and chartered trademark attorney at IP law firm Mewburn Ellis. “Ultimately it can be reflected in any remedies awarded.”

“The words ‘the caterpillar’ in both are descriptive, so consumers are likely to place more emphasis on the names, Colin and Cuthbert, which are not that confusingly similar,” argues Marks & Clerk associate Jack Kenny.

As for the visual trademarks, there are notable differences between Colin’s and Cuthbert’s packaging. M&S’s is predominantly green, while Aldi’s is multicoloured with a green background. Colin’s window only shows his side, while Cuthbert’s also shows its face.

“Having bought all the others, I actually think Cuthbert’s packaging is farthest away from Colin’s,” says King.

IP experts prefer M&S’s chances of building a case on the second issue highlighted in its announcement, of ‘passing off’. This means, literally, passing off a product as someone else’s, which requires no registered protection in the form of a trademark.

There are stages in convincing a court. The first is to show the claimant’s product enjoys ‘goodwill’, or, in other words, simply that it is viewed favourably by consumers. “I think M&S would be able to prove that, because Colin’s been popular for many years now,” says Kenny. Indeed, Colin celebrated his 30th birthday last year, while Cuthbert has only been on sale since 2019.

The second stage is to show that Cuthbert is a misrepresentation, and consumers could mistake it for Colin. Here M&S could make use of physical comparisons, and experts note the cake itself does appear to have more physical characteristics in common with Colin than some of the other supermarkets’ caterpillars. Tesco’s Curly, for example, has an orange face; Cuthbert is white with brown eyes, as is Colin’s.

This similarity may be behind M&S’s decision to target Cuthbert rather than the others. “If you look at them all side-by-side, the other supermarkets’ cakes offer more visual differences,” says Kenny.

But M&S’s case may also be hampered by those other cakes, whose very “existence could dilute the distinctiveness of Colin” Kenny adds.

Yet another problem for M&S is Aldi’s reputation for mimicking, as evidenced by it lapping up the attention brought about by the dispute, and the good humour in which consumers appear to be receiving its cheek.

“Some might say Aldi is notorious for sailing close to the wind on their lookalike products, so Aldi could argue that when a customer walks in and picks up Cuthbert, they might think of Colin but they know they are picking up Aldi’s lookalike. They are not being misled,” says Kenny. “If Aldi can convince the judge the customer knows they are picking up a lookalike, that could defeat M&S’s passing off claim.”

John Coldham, IP partner at Gowling WLG, agrees. “One of the classic defences Aldi brings is that people will know it’s not the genuine article but just a wink to the other brand.”

M&S could extend its argument beyond the customer in the Aldi store to whoever may be eating Cuthbert, and whether they could mistake it for Colin. The issue, known as ‘post-sale confusion’, proved decisive in a fashion case last year, of Freddy Jeans vs Hugz.

Gowling WLG, representing Freddy Jeans, successfully argued people could be confused about the provenance of the jeans even though the buyer and wearer may not be. The decision was the first in the UK to find post-sale confusion could amount to passing off, according to Coldham, who sees it as potentially relevant to Colin and Cuthbert.

In effect, it’s as if the person buying the jeans is “joining the conspiracy and trying to convince the world it’s the genuine article”, Coldham says.

In the case of the jeans, it could be someone walking along the street behind the wearer that is deceived. In the case of cake, it may be whoever shares the offending caterpillar – say, if a colleague brings one into the office for others to enjoy.

“You could be putting it on the table and everyone thinking: ‘It’s an M&S cake. It’s gone downhill, or got better, or whatever.’ That is post-sale confusion,” says Coldham.

Still, there’s no confusion over who has won this PR battle. Aldi is showing every sign of confidence in its #FreeCuthbert response to the episode – now it’s time to see if that confidence can cross over to the courtroom.