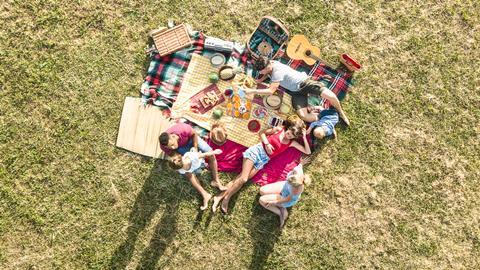 A summer picnic in the park has the potential to be a perilous experience. There’s the risk of sunburn or an unexpected cloudburst, assault by hungry dog or errant Frisbee, grass in your butties, or ants in your pants.

These are, of course, mostly minor inconveniences. Far more serious is the possible damage to one’s health from the tasty spread – as highlighted today by Action on Salt, which warns that one in four savoury picnic foods are dangerously high in salt.

The campaign group studied 555 savoury picnic finger foods available from retailers, and found that half were higher in salt than their category’s average salt target. (For reference, the NHS advises adults to eat no more than 6g of salt per day.)

Perhaps surprisingly, even some packs of olives were identified as containing “double the salt concentration of seawater” or “more salt than a McDonald’s hamburger and fries” – Aldi Specially Selected Hand Stuffed Halkidiki Olives (150g) being the worst offender with 5g of salt per 100g.

Action on Salt’s wide-ranging study goes on to point out: “Almost one in three products have no colour-coded front-of-pack labelling, making it hard for consumers to find the healthier option.”

And it calls for compulsory front-of-pack nutritional labelling on all food products and “for bold and comprehensive salt reduction targets to be set in 2020”.

These demands are not new, but they are to be expected given how salt is often relegated below sugar and satfat as a health risk.

Plus, the industry’s self-regulation of salt content is frequently cause for concern. Only last month, researchers from Imperial College London and the University of Liverpool linked 9,900 cases of cardiovascular disease and 1,500 instances of stomach cancer to the controversial Responsibility Deal of 2011, under which suppliers no longer have an independent FSA monitoring salt levels.

So, Action on Salt’s findings are timely. They’re also seasonally appropriate, of course – but ought to remain a concern beyond summer. Because numerous products highlighted are those that tap the year-round demand for on-the-go (pasties and pork pies) and plant-based (falafel and olives). That means consumers who want hand-held convenience or meat-free snacks are, without realising it, potentially putting themselves at greater risk of heart disease or stroke.

So, what to do? Well, given the Brexit-y state of UK politics these days, nutritional labelling and enforced salt targets are not likely to be high on ministers’ agendas. Nor do they need to be, as long as suppliers apply to salt levels the same expertise that has made great strides in cutting down sugar and satfat, and in being more transparent about nutritionals.

The journey to improved public health is a long road, but the industry has the lead and the direction of travel is correct. Suppliers and retailers can surely arrive at the desired destination without being towed there by the government.