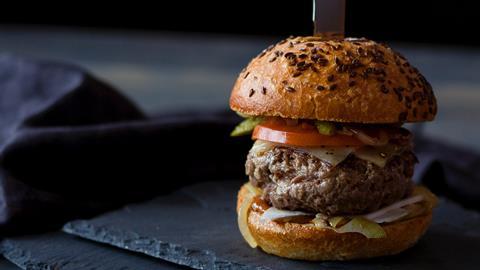 Veggie burger or veggie disc? Why the EU proposals miss the point

Not if it’s a veggie disc it wouldn’t.

Indeed, the term ‘burger’ doesn’t suggest something is made of meat at all, according to ‘international food awareness’ group ProVeg – which this week launched a petition against the EU proposal to prevent terms traditionally pertaining to meat products (like steak, sausage or escalope) from being used to market vegetarian alternatives.

According to UK spokesman Philip Mansbridge, there is “no evidence” to suggest consumers are confused or misled by the current labelling of vegetarian and vegan products.

“To suggest that consumers do not understand the meaning of the term ‘veggie burger’ and other similar terms is an insult to their intelligence,” he said today.

Which is interesting, because the Vegan Society is challenging the ban by claiming consumers would be confused by the alternative vocabulary suggested, such as ‘veggie discs’. Indeed, Mansbridge also said terms like ‘burger’, ‘sausage’ and ‘milk’ are serving an “important function in communicating characteristics that consumers are looking for when buying plant-based products”.

Call me crazy, but I think that’s a bit insulting to consumers’ intelligence too. I mean, veggie discs is a pretty silly name, but surely shoppers in the plant-based space don’t need something to be described as a ‘burger’ in order to grasp that they can slap it in a bun and serve it with fries.

While all this wrangling over names seems a bit ridiculous, it’s easy to understand why plant-based producers are getting so wound up.

If the EU plans go ahead, the industry will face an administrative and logistical nightmare to remove the banned terms.

The EU has already shown it is willing to enforce the rules, with the European Court of Justice in 2017 ruling against German company TofuTown for using dairy denominations like ‘milk’ and ‘cheese’ – banned for use on products that don’t contain animal milk since 2013 in the EU.

Producers have a point on the consumer front, too. People have been buying veggie sausages for years, and – with the odd exception, I’m sure – most of those shoppers didn’t think they were purchasing pork.

It’s also easy to understand why the meat industry is keen to see the EU ban come into force. The rise of plant-based is an undeniable threat, and the industry is unsurprisingly keen to do whatever it can to protect itself.

But, I’d argue, the best thing the British meat industry could do for itself at this juncture would actually be to stand up and defend the right for plant-based products to call themselves sausages, rather than ‘veggie tubes’.

Opinion: What Derek Sarno’s love of mushrooms tells us about the future of plant-based

Because no amount of labelling legislation is going to stop the tide of plant-based. And trying to stop producers of vegetarian and vegan food from describing their products as they have for years, is just going to feed the myth that the animal agriculture sector is somehow in cahoots with the government on an evil mission to destroy the planet.

Instead, the meat industry could shatter that myth by standing up for its plant-based peers.

It would be a plot twist that even the great Bard would be proud of. And it would be the first step to righting the very wrong perception that people have about the British meat industry, which should focus on singing its own (plentiful) virtues, rather than trying to silence others.