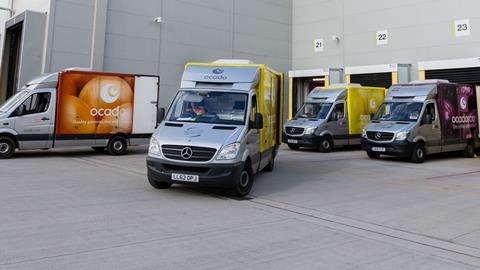 What a ‘mini-CFC’ means for the people of Somerset, M&S and Ocado’s US ambitions

Ocado Retail today announced a new CFC, in Bristol. But the facility, the company’s sixth, is a little different to the previous five.

It will be much smaller, with capacity to fulfil about 30,000 orders per week. That’s considerably fewer than its flagship CFC in Erith – “the largest robotic picking facility for grocery anywhere in the world” – which manages around 200,000 a week. It’s also less than half the capacity of CFC number five, currently under construction in Purfleet, which is expected to fulfil around 85,000 weekly orders.

The company – a joint venture between Ocado Group and M&S – is calling it a ‘mini-CFC’, which despite its small size will “achieve productivity close to that” of the other facilities.

The type of location is different too. Typically, the company has targeted sites close to high-density populations, but with enough space for facilities with square footage in the hundreds of thousands. There are only so many.

Ocado’s Erith, Hatfield and Purfleet CFCs sit on the industrial edges of London. Its Dordon CFC lies between Birmingham and Leicester. Ocado’s Andover facility (its current smallest, with a 65,000 weekly order capacity) is not next to a big town, but is well connected to the M3 and M4.

Until now that has meant places like Bristol are served through spokes – warehouses for intermediate handling of orders between CFCs and customers. With its current four CFCs and 16 spokes, Ocado can reach about three-quarters of UK households. Around 30% of deliveries are made directly from CFCs, the company has said. But replacing Bristol’s spoke with a CFC could increase fulfillment speed while reducing its cost – and the new mini-CFC can have spokes of its own, allowing the company to penetrate further into unserved areas.

“Spokes can and will still be used, but this time those spokes will serve even smaller cities and villages, effectively increasing the applicability of the Ocado model,” says Bruno Monteyne, senior analyst for European food retail at Bernstein. Smaller CFCs in more places also increase the number of customers that can be offered same-day delivery.

Also different is the timeframe it will take to become operational: within about a year, according to the announcement today. The fact it is being built within an existing warehouse means operations can begin “significantly faster” than if a new facility needed to be built, the company says. A year is “about half the typical deployment time of a new CFC” says Monteyne.

As Ocado Retail put it in its half-year results this summer, the key is “velocity not complexity”. Mini-CFCs like Bristol’s will go some way to proving that. And Ocado needs to. In the US, analysts downgraded Kroger stock over concerns about its partnership with Ocado – chiefly the time it takes to build big CFCs and their value against “micro-fulfilment” alternatives.

In the US, Ocado is up against the likes of Takeoff Technologies, which builds far smaller automated fulfilment sites that can squeeze into spaces closer to customers. They’re potentially cheaper and quicker to build, too.

The new mini-CFC and the one-hour grocery service Ocado Zoom – for people living close to the company’s Acton warehouse – both serve as a signal to the market that Ocado can do small too. The Bristol facility will be a boon for M&S and increases its reach, but, as Monteyne puts it, “the biggest impact is on the Ocado technology business globally.”