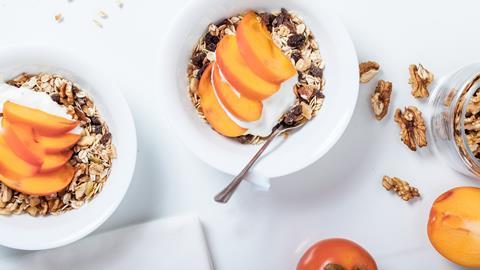 What Danone's 100th anniversary tells us about its plant-based ambitions

Danone was clear about what it didn’t want for its 100th anniversary. Speaking at the commemorative conference in Barcelona yesterday, marketing VP Cristina Kenz said it could easily have been a retrospective look at all of its achievements.

Instead, the company wanted to “look forward to the future”. That much certainly came across during the two-day event. There was plenty of talk about the future of food, farming and the environment in general. There was even a manifesto for the planet written and presented by schoolchildren. Yes, it might sound like a cynical ploy, but it was followed by Andre Agassi talking about his work to improve the lives of the next generation – and, it turns out, it’s hard to be cynical when Andre Agassi is in the room. (His advice for his younger, less worldly self? “Shave your head.”)

Read more: What Derek Sarno’s love of mushrooms tells us about the future of plant-based

Amid all this positivity, though, there was one burning question. In the era of plant-based, what is the future for a dairy-led company? The guided visit to local supermarkets showed the plant-based craze is almost as big in Spain as it is in the UK. And Danone is clearly aware of the need to adapt. The morning coffee was served exclusively with Alpro plant milks. Meanwhile, Alpro yoghurts and iced coffees were available alongside dairy-based brands such as Activia at the breakfast buffet. 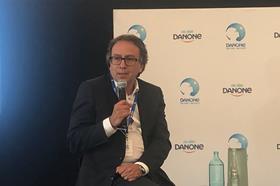 Francisco Camacho, Danone’s executive VP of dairy and plant-based, also had a prominent presence at the event. He took on the title 18 months ago, shortly after Danone acquired Alpro owner WhiteWave. He offered no more details on when the much-anticipated plant-based Activia would make its debut, but reaffirmed Danone’s commitment to giving other brands the same treatment. “We want to keep consumer needs and desires at the centre of our decisions, so we need to provide them what they are expecting in term of options,” he said.

All of which could make one wonder whether Danone is quietly resigning itself to a limited future in dairy. But Camacho was adamant this isn’t the case. He sees his two divisions as complementary, rather than opposite ends of the spectrum. Camacho was keen to stress that it’s largely not a case of consumers shunning dairy in favour of dairy-free versions. Instead, most will be consuming a mix of both. “When you look at consumer habits, they switch,” he argued. “They may be have their coffee with plant-based milk and their cereal with dairy milk.” Indeed, he pointed out there are areas of dairy growing “faster than plant-based” in Danone’s markets – for example, plain dairy yoghurt.

So Danone’s mission is to offer as much choice as possible, to appeal to both existing and new customers. That’s where it will be learning from Alpro. Camacho was unequivocal that Alpro’s biggest selling point is its innovation culture. “When it comes to innovation Alpro stays close to consumer needs,” he said. “It has a very accelerated pace of innovation so we’ve learned how they have played very close to what consumers want.”

Which means plant-based Activia is just the beginning.