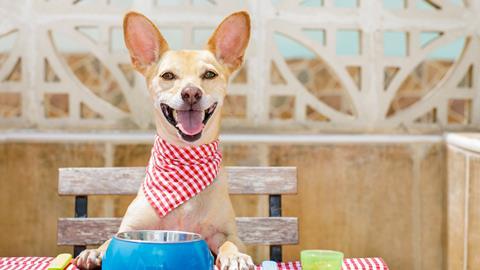 Why the rise of the 'gastropooch' is no laughing matter

Surf and turf. Beef and russet potato. Venison and squash. These dishes would be pretty standard fare on a gastropub menu. But at the upcoming new eatery on New York’s Union Square, these dishes won’t be served to foodies. Instead, they will be reserved for their pets.

OK, so it’s not actually a restaurant. But it’s the next best thing. According to a report in The Telegraph this week, the Just Food For Dogs kitchen is part of American store PetCo. Chefs in the kitchen will whip up 2,000lbs of fresh food each day, all of which will go on the shelves – presumably at a premium price. It will be the first of its kind in New York, but it’s not a new concept. There are already seven such kitchens in California (where else?).

Not long ago, the idea would have raised a few eyebrows (and laughs). Admittedly, it is still tempting to scoff. The premise of a fresh petfood chef all feels very at home in California, where there is such a thing as a ‘wash and blow out bar’ for dogs. In the UK, we like to think we’re a little more down to earth.

Read more: Could paleo for pooches be the next big thing in dogfood?

Still, homegrown sales figures suggest the rise of the gastropooch is no laughing matter. As a nation, we’re increasingly treating our pets like humans – hence the term ‘furbabies’. As we demand more nutritious, fresh food for ourselves, we are starting to demand the same for our pets. That means petfood companies offering something beyond your standard bowl are in huge growth. Take dog food brand Good Boy, which offers natural, functional and vegetarian options. Its on-trend range saw it reap the highest absolute value gain outside the top 100 in our latest Britain’s Biggest Brands report.

The appetite from large companies is another sure sign this is a trend worth noticing. Last April, Nestlé took a majority stake in Tails.com, which provides pets with bespoke nourishment according to factors such as age, breed, size and level of activity. Mars is also dipping its toe in with the Perfect Fit brand, which invites customers to sign up to an online wellness programme based on three areas: eating, moving and playing.

And lest we dismiss the more fanciful stuff as a US fad, let’s remember that these shores are home to a bakery called Four Legged Fancies, which offers hampers and ‘pupcakes’ for dogs.

So it may not be long before we see chefs arriving into UK petfood stores. The question is: how long before the first Michelin-starred establishment opens?