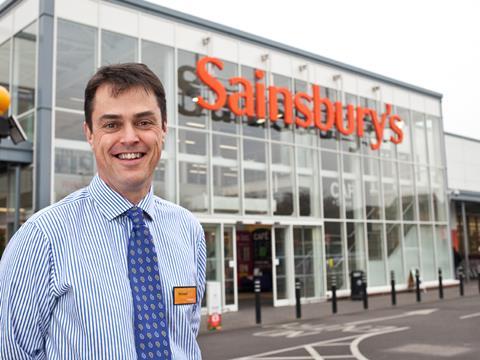 “I am so proud - 30 years in retail and this is the highlight of my career,” said the newly crowned Store Manager of the Year Richard Perry, from Sainsbury’s in Heyford Hill.

He was speaking backstage after picking up his gleaming trophy just a few hours after wowing the judges during a 20-minute presentation (see below) and Q&A session where he detailed how he had united his team to fight back against a disastrous set of roadworks in Oxford that lasted for seven-and-a-half months and ringfenced his store.

They were so bad shoppers were unable to shop and colleagues were struggling to make it in. And he’d only been in charge for three weeks when it happened.

“It was chaotic,” he told the judges. “Not only was I trying to reset the store in an already challenging environment but we had to incorporate roadworks for months. The impact was immense. In the first week, sales were down 15%, customer numbers dropped by 20%, staff couldn’t get to work and morale plummeted.”

His trophy is now a permanent reminder of how he and his team turned the store around, with sales now up 2.8% and customer numbers up by 3,000 a week. And Perry was keen to stress that it was a genuine team effort before heading off to celebrate.

“It’s a result for the store and all my colleagues,” he said. “I can’t wait to go back and share this with them. I want to get them all together at the front of the store and really shout loud about how proud I am of them. Without them I am nothing. And tomorrow morning I’ve got 340 colleagues to say thank you to.”

Store manager of the year: how the winner was decided

The six store managers were nominated by their respective supermarkets after winning the Grocer 33 Store of the Week competition. They each made a 10-minute PowerPoint presentation before being grilled for a further 10 minutes by a distinguished panel of judges: Tony Brown, COO, 99p stores, Steven Esom, chairman, BRC Trading, Chris Walker, director of retail operations, Lidl, Lorraine Hendle, managing director, WRBM grocery manufacturing and retail, and Adam Leyland, editor of The Grocer