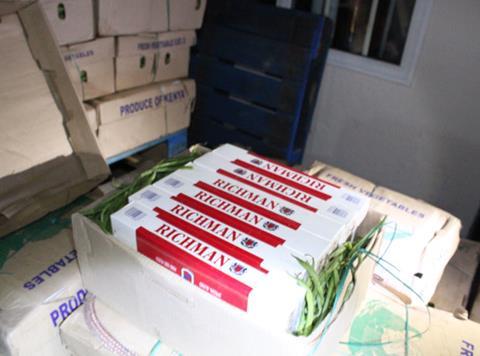 A consignment of smuggled cigarettes confiscated by HMRC

The NFRN is calling for greater action to tackle the illicit tobacco market after a new HMRC report revealed consumption of illegal cigarettes is at a five-year high.

The report, which measures tax gaps, revealed that though overall tobacco consumption was down, five billion illegal cigarettes were consumed in 2015-16, an increase of two billion on the previous period. According to the report, illicit tobacco consumption is at the highest level since 2010-11, costing the Treasury £2.4bn in tax revenue.

The NFRN wants government agencies to invest in more resources to tackle irresponsible retailers and educate the public on the health risks of smoking illegal tobacco.

“The findings in this new HMRC report are of grave concern to independent retailers who suffer first hand from the activities of those selling illicit tobacco,” said NFRN chief executive Paul Baxter.

“Legitimate retailers don’t sell to underage customers, they retail responsibly and pay the tax due on the product, yet they are the ones who are seeing their tobacco sales suffering.

“We have repeatedly warned the government that it needs to act to prevent control moving from a market of responsible retailers to one that comprises a wholly unscrupulous criminal fraternity who will exploit any opportunity to make money, including selling tobacco to those under the age of 18.

“With the publication of this report, the time is right for HMRC, the police, Border Force and Trading Standards to allocate sufficient resources and tackle the scourge of illicit tobacco once and for all.”