A blinder for beer as cider brands sour

Don’t let the fact that food & drink’s fastest falling brand is a lager (Carlsberg, down £73.6m) fool you 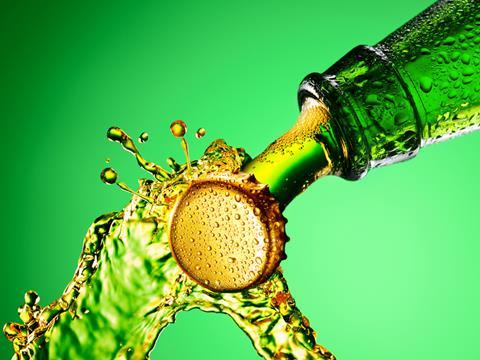 Don’t let the fact that food & drink’s fastest falling brand is a lager (Carlsberg, down £73.6m) fool you. Lager has enjoyed a rebirth.

In fact the whole category has. Lager’s £41.6m surge was the biggest in value terms but ale & stout sales were also up. What’s more, value grew ahead of volume. How?

Good summer weather certainly helped, but it’s also been thanks to an explosion in sales of craft brands and premium bottled ales, with ‘artisan’ BrewDog, whose Punk IPA is now Britain’s seventh biggest ale, leading the way with a 161.3% surge.

In the case of lager, retailers are also ditching brews at the cheaper end of the spectrum. “There’s definitely a shift away from standard brands, which are in decline,” says Nick Robinson, marketing director for AB InBev. Stella Artois is up £13.6m, despite the brand’s cheaper 4% abv variant being in steep decline thanks to this trend. Budweiser and Corona are up £34.6m and £34.4m respectively.

The same thing is happening in ale, with canned ales such as John Smith’s and Boddingtons losing out as bottled brews win more shelf space. “Consumers are interested in stories, ingredients and provenance and this is a trend we are seeing influence purchasing decisions across alcohol,” says Diageo off-trade sales director Guy Dodwell.

Guinness is an example of this, with all variants but Original in growth as the brand enjoys the halo effect of bottled NPD under the Brewers Project initiative. Most successful is West Indies Porter, which is now worth £4.4m after sales jumped by nearly a third.

Diageo has similar hopes for Smirnoff Cider, claiming it’s worth £2.4m six months after launch. But cider’s gone sour, down 72.8 million litres. Casualties include Carling British and Somersby, both of which have all but left shelves. Stella Cidre had £13.4m wiped off, a 42.3% volume loss, as retailers prioritised Kopparberg and Rekorderlig.

AB InBev says fresh marketing and a move away from cans will resurrect Cidre, cider’s biggest loser. For Carlsberg, lager’s biggest loser after Tesco axed it in 2015, hopes are that a new campaign will help win back space. In today’s climate, that seems a tall order.