Bagged snacks: Brands storm ahead of own label crisps 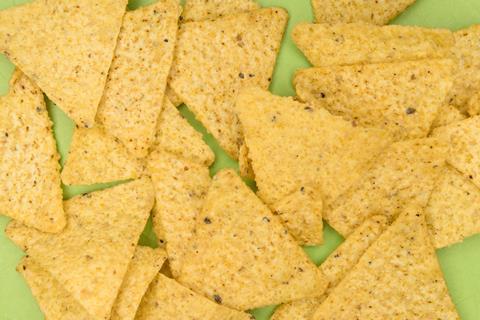 When times get tough, Brits turn to crisps. At least, that’s what the sales figures suggest. In the first month of the initial national lockdown, sales surged by a fifth on the same time last year. That’s proven a substantial boost to full-year performance. The category grew £113.1m to £3.3bn, as an extra 16.1 million kg went through the tills.

It’s essentially good news all round for a category that had been struggling with stagnating volumes. But in this snacking frenzy, brands have been the real winners. They’ve seen a 4.6% boost to volumes, while own-label lagged behind with a 2% rise, in a reversal of last year’s fortunes.

It’s all indicative of wider grocery trends, points out Kellogg’s, whose Pringles brand delivered the largest value gain of £28.2m.

“People have begun to turn back to familiar and reliable brands,” says senior category manager Polly Price. “Shoppers are looking for new ways to treat themselves and are opting to pay a little bit more for branded products as opposed to picking up own-label.”

PepsiCo has similarly reaped the benefits of this trend. Its market-leading Walkers brand amassed an extra £27.2m, while Doritos is up £10.2m. “At a time of uncertainty, people turn to the brands they love and trust. They take solace in the familiar,” says PepsiCo senior marketing director Fernando Kahane.

The snacking giant hasn’t just passively enjoyed the benefits of owning big names, though. It’s also looked to adapt to the growing appetite for larger formats. “Families have been on the lookout for ways to add a little fun to their evenings together, taking the ‘big night in’ to new levels,” Kahane explains.

It’s applied that knowledge across its portfolio. In the case of Wotsits, PepsiCo launched a super-sized Giants sub-brand. It names that, alongside its major marketing campaign in August – which included a Guinness World Record for the production of the longest puffed corn snack – as a driving force behind Wotsits enjoying a 46.8% increase in volumes that “completely exceeded expectations”.

In the case of Doritos and Walkers Max, up 5.6% and 7.1% in value respectively, the snacking giant turned to innovation to capitalise on increased demand.

Walkers Max released new flavour options alongside a Double Crunch variant, which promises “two times the crunch of standard Max”. Plus, the overall brand was “completely restaged” with a multimillion-pound campaign (see below). “What’s more, we did it fast. It took just six months from concept to sign-off,” Kahane adds.

Packaged in a recyclable triangular tube, it represented an audacious take on rival Pringles’ notoriously unrecyclable cylindrical version (although the Kellogg’s brand is now trialling a paper can, see Top Launch). Crucially, the sharing format played to all the right consumer trends.

“Brands are trying new formats to adapt to changing consumer habits,” explains Nielsen’s Lisa Duranton Jones, who names those that have “shifted to larger formats” as the most successful this year.

That’s because these big bags have a crucial appeal at this time: an ability to bring a sense of occasion to a night in. “With people spending more time at home, they are turning to brands to enhance those in-home experiences, and help make a ‘big night in’ feel like a ‘big night out’,” says KP Snacks group sales director Andy Riddle.

This has helped buoy its shareable and “perfect when paired with a drink” brands KP Nuts and Tyrrells, which grew volumes by 9.7% and 5.7% respectively.

Not all of KP’s brands have benefited equally, though. While sharing bag sales have soared, singles packs have suffered from the lack of on-the-go occasions. So Hula Hoops – which relies heavily on single bags and meal deals – saw volumes fall 0.4%. Riddle admits the brand “has been affected by changing shopping dynamics”.

Premium snacks have also taken a hit. Nielsen’s Duranton Jones says “well-established brands with relatively low price points” were in the sweet spot this year – and brands that fall foul of that have suffered .

“Premium and better-for-you brands struggled in 2020 due to high price points and distribution drop,” she explains. As an example of the former, see Kettle Chips, which fell 1.5% in value as volumes plateaued. And for the latter, see Pom-Bear, down 10.5% in value. Not only does it fall into the better-for you category, but it also suffered from a decrease in promotions, according to KP.

Still, Riddle is confident in the future of the brand, which he expects to benefit from a “growth in healthier snacking and sharing” next year. “We have a strong core consumer base and positive repeat rates due to Pom-Bear’s health credentials… we are confident our forward plans will drive high engagement and purchasing intent,” he says.

“With the new year – and ‘new me’ resolutions – positive picks and healthier snacking will become even more prevalent,” he adds.

PepsiCo’s Kahane also sees a future in better-for-you options, and names Walkers Oven Baked, Snack a Jacks, Sunbites and Off The Eaten Path as an ongoing “strategic focus”.

Next year will also herald an even greater focus on NPD, if the big names are anything to go by. Kahane says PepsiCo will be “doubling down” on development with “some exciting NPD to cater for both existing fans and brand-new shoppers”.

Those plans may well involve hot flavours and bigger bags, if Duranton Jones’s prediction is anything to go by. She says “new spicy and exotic flavours are expected to sparkle shopper interest” in 2021, along with further experiments with “new formats to adapt to changing consumer habits”.

And whatever those habits may be, it’s clear bagged snacks will be a part of them. As Kahane puts it: “It has never been so clear we are a nation of crisp lovers.” 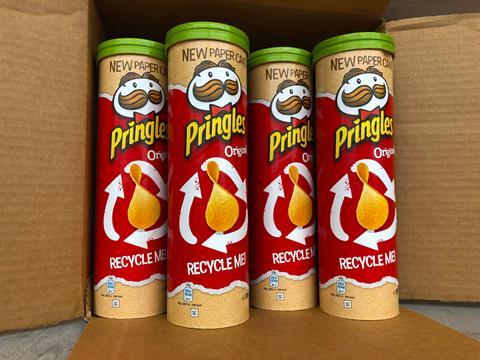 With its cardboard outer, polymer and aluminium inner lining, steel base, foil tear-off lid and plastic cap, it’s little wonder the Pringles can has been dubbed “number one recycling villain” by environmentalists. In September, Kellogg’s responded to the criticism with a redesign of the brand’s infamous tube. It looks much the same, but is made from recycled paper, with two lid options: one paper and one plastic. For the first time the Pringles pack is able to – and does – shout ‘Recycle Me!’.