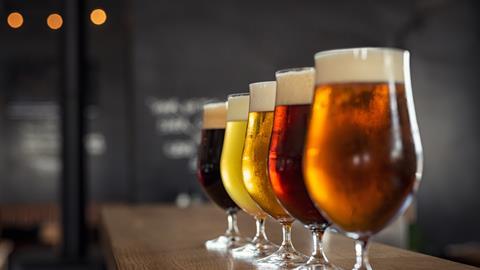 Beer and cider consumers are getting more experimental. Rather than a simple pint, they are demanding a brand with strong heritage, story and even food pairing credentials. All this has sent craft beer soaring – but there are threats on the horizon.

This research was commissioned by The Grocer and carried out by Kantar Research Express independently from Heineken UK. 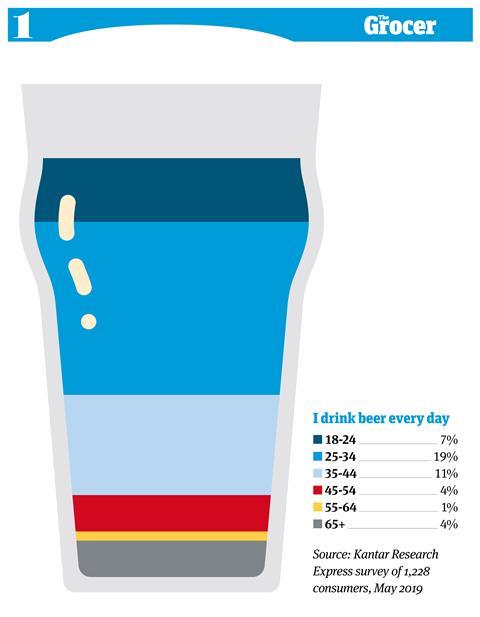 Forget the generation of moderation. If you believed the headlines, you would think millennials were all shunning beer and wine in favour of kombucha and herbal teas. In fact, our poll reveals quite the opposite.

The 25 to 34-year-old age group emerged as the most frequent consumers of beer, with 19% indulging in a brew every day. And a whopping 61% will drink beer at least once a week.

That contrasts sharply with the more moderate 55 to 64-year-old age group. Only 1% will drink beer every day and a third will have a sip at least once a week.

Interestingly, though, consumption also falls among the youngest age group. The 18 to 24-year-old age group are far less frequent beer drinkers than the generation just above them.

2. Half of beer consumers are influenced by the brand 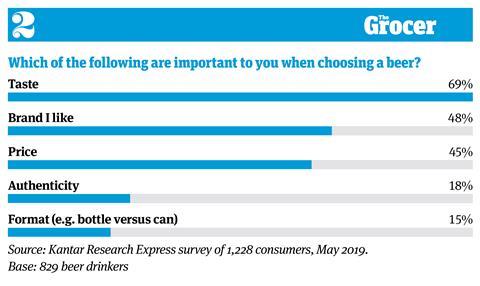 Brands are second only to taste when it comes to the factors influencing beer choices. It’s perhaps little wonder in a market that is so heavily dominated by brands – own label only accounts for 7.7% of lager sales by value [Kantar 52 w/e 24 February 2019].

That reinforces the importance of a strong proposition. “In a category that has such variety, it’s really important that brands stand out by resonating with consumers’ own values,” says Izabela Glodek, brand unit director at Heineken UK.

However, things seem to be changing among the younger generations. Only 34% of 18 to 24-year-olds named brands as an important factor when choosing a beer. That put it behind price, named by 40% of this age group.

By contrast, 59% of the 65-plus age group named brands as important, while 48% cited price. 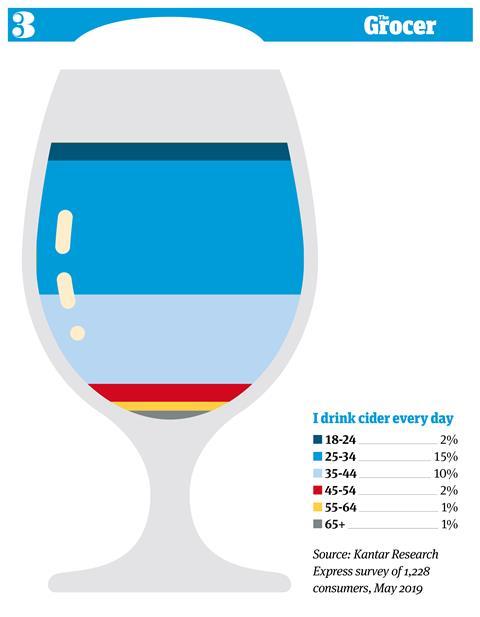 In beer, the 25 to 34-year-old age group leads frequency of consumption. It’s a similar story in cider. In our poll with Kantar, 15% of this age group said they drank cider every day. Four in 10 will drink it at least once a week.

And again, frequency of consumption falls among the oldest and youngest age groups.

There are some interesting differences outside of age, too. In terms of geography, consumers in the south tend to be the most regular cider drinkers.

In London, 15% of consumers will make it a daily habit and 7% in the south do the same.

That compares with just 2% who drink cider every day in Wales and the Midlands.

There is also a gender split at play. While 7% of men drink cider every day, that figure falls to 3% among women. And as many as 48% of women polled said they never drank cider.

4. But brands are a less important factor in cider 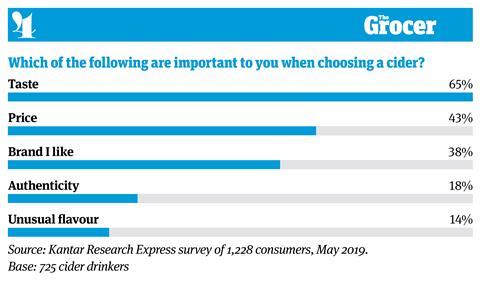 In beer, half of consumers said the brand would influence their choice – making it the second most important factor. In cider, brand is less of a consideration. It was deemed important by 38% of shoppers, making it the third biggest influencing factor after taste and price.

For all demographics, taste was the prime consideration. But taste was more important to some than others. Among the 18 to 24-year-old age group, 59% named taste as an influencing factor, closely followed by price, which was named by 42%.

Certain areas of the country were also more price-sensitive than others. In the Midlands and Wales, half of consumers said price was important. That compared with just 30% of respondents in Scotland.

5. Apple remains the most popular cider 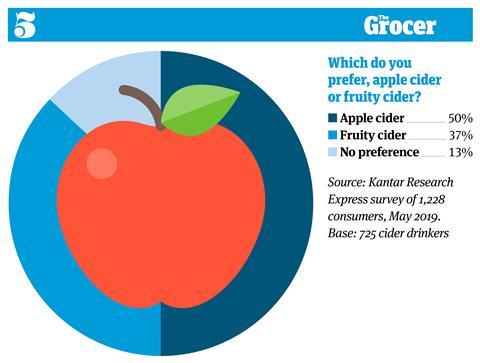 Fruity ciders have grabbed all the attention of late. And it’s not unjustified. According to Kantar, there are now 1.2 million more fruit cider shoppers than apple cider shoppers. And fruity brands have racked up impressive gains. Take Kopparberg, up 9.3% to £164.1m and Old Mout, up 33.5% to £27.1m [Nielsen 52 w/e 20 April 2019].

But that doesn’t mean the nation has entirely switched allegiances. Half of consumers polled said they preferred apple cider to fruity, while only 37% said the opposite.

That goes some way to explaining why brands that have stuck with apple have still managed to deliver some explosive growth. Thatchers, for example, is up 25.9% to £81.1m.

However, fruity cider is more popular among younger consumers.

In the 18 to 24-year-old age group, 54% said they preferred fruity cider, compared to 32% who veered towards apple. Conversely, 63% of 65-plus consumers would choose apple cider over fruity.

There was also a clear gender difference. Over half of women would choose fruity cider over apple. But among men, the situation was reversed. Nearly six in 10 preferred apple cider and only 25% would opt for fruity.

6. There is a general understanding of craft beer

The term craft beer is thrown around fairly regularly. But does the average beer consumer really know what it means?

This level of understanding isn’t equal across all demographics. Four in 10 men say they have a good understanding of the term craft beer, compared to just under three in 10 women.

And perhaps unsurprisingly given their frequency of beer consumption, the 25 to 34-year-old age group was the most clued up on craft beer. A whopping 55% said they had a good understanding of the term.

7. But there is a danger of craft saturation 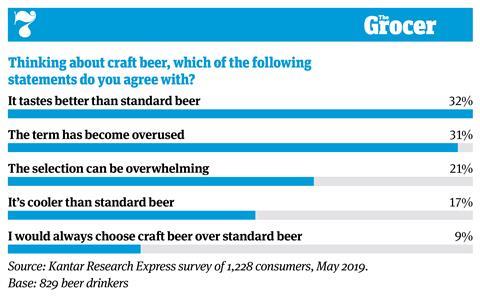 Here’s a mixed bag of figures for the craft beer industry. On the plus side, a third of consumers believe craft beer tastes better than your standard brew. But almost an equal number of consumers say the term has been overused, and a fifth feel the selection is overwhelming.

Older age groups are particularly likely to have reached a saturation point with craft beer. Among the 55 to 64-year-old age group, 39% feel the term has become overused, and 37% of the 65-plus age group said the same.

On the other side of the coin, the beer-loving 25 to 34-year-old age group is most positive about craft. Among this demographic, 43% say craft brews taste better than standard beer.

Considering these are the most frequent beer drinkers, it suggests the craft beer boom isn’t going anywhere anytime soon.

8. Londoners are more willing to pay a premium for craft beer 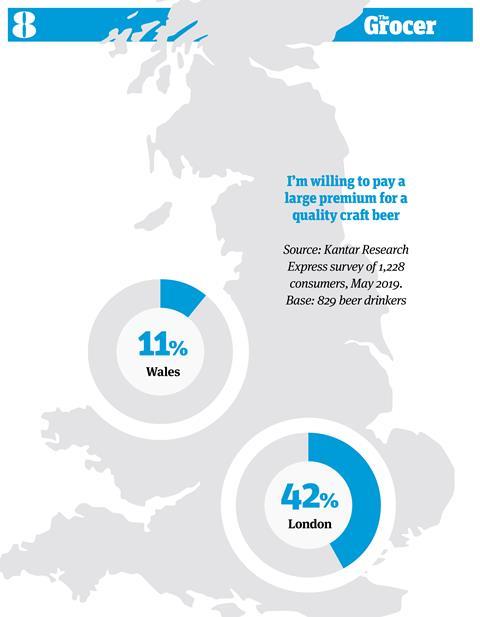 Everything comes at a premium in London, right? In a city where residents can pay £10 for a pint, higher prices are generally more accepted.

Other parts of the country were less accepting of a steeper price. In Wales, for example, only 11% would pay a large premium for a quality craft beer and 42% said they wouldn’t be willing to pay any premium at all.

Among the age groups, the 23 to 34-year-olds were most willing to fork out. Over four in 10 would pay a large premium for a quality craft beer.

9. A third of consumers think world beers are distinctive and different 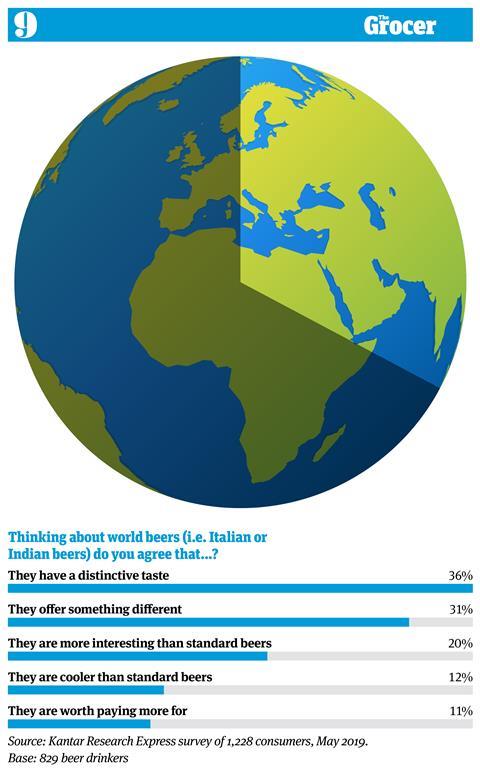 That’s largely down to positive perceptions of world beers. Over a third of consumers in our poll thought they had a distinctive taste, and three in 10 agreed they offered something different. Across these two statements, there were little differences in opinion across the demographics.

Plus, a third of 25 to 34-year-olds said world beers were more interesting. It’s no surprise, then, that this age group is more willing to part with extra cash for the proposition. Nearly a fifth would pay more for a world beer, compared to just 5% of the 65-plus demographic.

10. Younger generations are interested in pairing beer with food 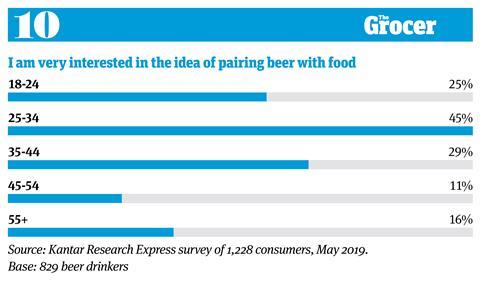 We’re all used to pairing wine with food. Pairing beer with food is a newer concept for UK consumers. Still, the appetite seems to be there. Across our total sample of beer drinkers, 50% said they were either very or quite interested in the concept.

Encouragingly, that interest is even higher among younger consumers. And the 25 to 34-year-old age group was the standout demographic. Among this group, 79% expressed some interest in the idea of pairing beer with food and 45% said they were very interested.

Heineken, which is promoting the idea of food pairing with its Birra Moretti brand, says the concept has “never been more popular”. “Matching beer with food relies on the four Cs: contrast, complement, cleanse and cut,” says Glodek. “With huge variety in beer, there is a match for every type of food.”