Is Waitrose getting its store format development right? 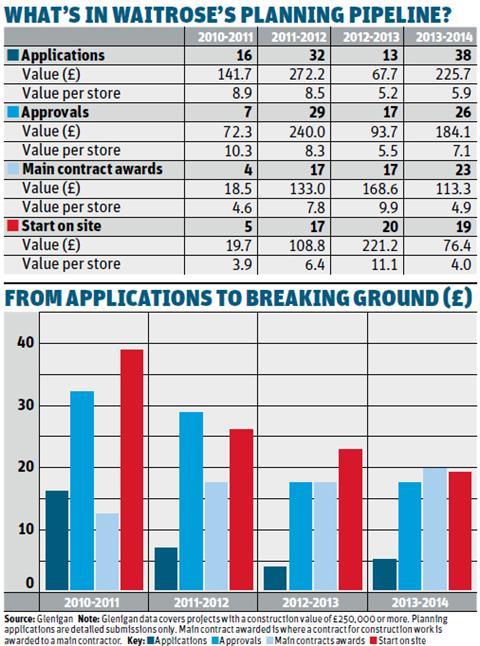 Waitrose MD Mark Price hit the headlines this week following a newspaper interview in which he suggested some of his rivals might have to close down some of their bigger stores in the wake of dramatic changes to the way people shop in the UK.

However, as latest details of the retailer’s property pipeline based on analysis for The Grocer by Glenigan are revealed, Waitrose has problems of its own. Is it thinking too big in terms of store formats?

There is no doubt Waitrose has been a grocery success story over the past few years. Its growth has been well ahead of the market and only eclipsed by Aldi and Lidl. But latest Kantar market share figures published this week, showing sales in the 12 weeks to 9 November up 5.6% and just 4.8% in the last four weeks of the period, include a big contribution from new space, which analysts agree is running at above 5%. The retailer’s like-for-likes are understood to be flat at best.

All this means current investment Waitrose is piling into new stores and formats is all the more crucial in terms of getting it right at such a dynamic time for the industry. Price said at the weekend that Waitrose is ­probably three or four years ahead of rivals in terms of ­planning for the changing grocery market, in which convenience is king, and that retailers need to offer shoppers more excitement and reasons to not only visit but ­linger in stores.

It is interesting to see, however, that unlike many of its rivals, it is not putting many of its eggs into a convenience-shaped basket. The Glenigan figures confirm that of the stores it has opened or will open this year, 15 are supermarkets and 10 are Little Waitrose convenience stores. On top of this, in the year to March 2014, 20 of the 23 construction contracts awarded by Waitrose were for supermarkets, and 15 of the 19 projects to start on site were also supermarkets.

According to Glenigan economics director Allan Wilén, there has been a more subtle shift towards convenience in the early planning pipeline. In percentage terms, just 10% of Waitrose projects starting on site this year were c-stores, ­compared with 27% of the projects entering the pipeline.

One leading retail property insider told The Grocer the relatively slow rollout of c-stores was because Waitrose is struggling to make its smaller format work outside London. He suggested the mission for convenience is different outside the capital and that Waitrose would have to crack a 10,000 sq ft model with car parking. “If it can do this it can attract more of the affluent Tesco and Sainsbury’s shoppers who are feeling disenfranchised.”

However he warns even Waitrose, which doesn’t have the issue of what to do with space in giant superstores as more non-food sales move online, must remain focused on its “core attributes”.

This is a continuation of the latest thinking from Waitrose in terms of making its stores stand out from the crowd. While the property expert believes it should limit its bigger stores to about 18,000 sq ft, he is clear Waitrose needs to remain distinct from other supermarkets and the obsession with price.

“Waitrose [should be] convincing shoppers that some things are worth paying a little extra for,” he argues.