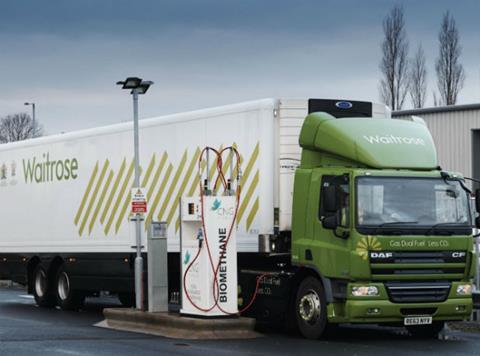 Waitrose has committed to quadrupling its number of biomethane lorries by the end of the year after finding they cut carbon dioxide emissions by more than 80%.

The retailer is set to take its fleet of biomethane trucks from 12 to 49 in the next five months to cut back on its carbon footprint.

The lorries, which are currently used in the Midlands and northern England, have a range of up to 500 miles on a full tank.

The 14-month analysis of gas-powered vehicles filling up at a specialist station in Leyland, Lancashire - including Waitrose lorries - recommended compressed natural gas should be the “fuel of choice for HGVs in the future”.

Justin Laney, general manager of transport at the John Lewis Partnership, said: “Our business is committed to helping the environment and biomethane delivers significant green benefits. As well as being quieter, every long-distance lorry we switch from diesel to gas saves as much CO2 as taking 70 cars off the road. This is why we plan to switch more of our trucks to biomethane in the future.”