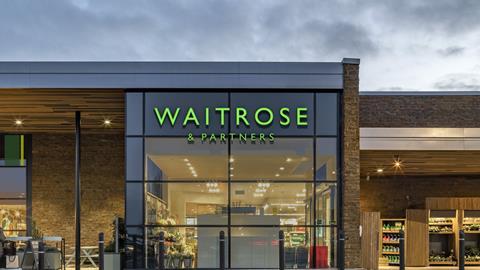 What does JLP’s five-year plan mean for Waitrose?

The highly anticipated strategy update today (16 October) from John Lewis Partnership (JLP) contains plenty of talking points, with its extra £200m of cost cuts (beyond the £100m already pledged), its promise of new services to move the group “beyond retail” (including a move into the housing market), and a not unambitious pledge to turn a first-half loss of £635m into an annual profit of £400m in five years.

The £1bn Partnership Plan is heavily focused on boosting JLP’s online proposition. John Lewis’ online to in-store sales ratio currently stands at 40%/60%, and it is intending to bring its digital side up to 60%-70% in the next five years.

It’s a lot less than that on the grocery side, of course, but weekly orders have risen from 55,000 pre-Covid to 190,000, after a major ramping up of its online operations in anticipation of the split from Ocado coincided with coronavirus-driven demand, and the Waitrose dotcom business now represents 16.5%-17% of Waitrose sales. The supermarket is looking to increase this to 20% “within the next year” or so, as more stores in the estate add online picking, and a third CFC is added, with the five-year strategy citing 250,000 weekly orders as a target.

Since parting ways with online specialist Ocado in September, Waitrose has also lowered its online minimum spend threshold from £60 to £40 to attract and retain more customers. It said a “higher proportion” of new shoppers have made orders below the former £60 threshold than existing customers and orders are up a further 20% from the 160,000 figure just prior to the split .

With convenience another key growth area in grocery – and having rowed back from earlier moves into convenience stores and forecourts – Waitrose is planning to focus on various types of convenience-led shopping missions serviced from within its supermarkets. Bailey suggests there are “numerous ways we could do better” on the convenience side. That includes improvements to the range of food for now and food for tonight, but it is also expanding its on-demand grocery trial with Deliveroo to 30 new locations, up from five previously, and has promised additional link-ups further down the line.

Bringing the brands together

A key element of the new plan involves JLP finally bringing its two retail offers together. Currently less than a third (30%) of its customers currently shop across the two brands. It’s been a real blind spot for years, but the Partnership is wasting no time acting to address the obvious overlaps and missed opportunities, with Waitrose Christmas hampers to be stocked in John Lewis shops, while John Lewis Christmas trees are to be placed at the front of 300 Waitrose stores.

For Waitrose the more significant change will likely come on the homeware side: the 280 Waitrose stores that currently stock general merchandise will offer a significantly increased John Lewis homeware range by end of 2021.

There will also be a much bigger push to enhance the click & collect service currently available in Waitrose stores – which could see fitting rooms installed in Waitrose stores to allow shoppers to try on John Lewis purchases there and then and thus easily returning them if necessary.

Pippa Wicks, executive director of the John Lewis business, says that while its “stores remain an integral part of the [shopping] experience”, the current climate offers an “opportunity to become a destination retailer by adding a personalised approach”.

Waitrose stores are also set to get more of the John Lewis-style in-store theatre. Nina Bhatia, executive director of strategy and commercial development at JLP, believes these changes will “firmly establish Waitrose and John Lewis as the go-to brands for customers that care about quality, value, and sustainability”.

But surprisingly there was no update on the possibility of putting Waitrose shops in more of its department stores.

As cash-strapped shoppers tighten the purse strings, Waitrose’s Essentials range has seen sales rise by close to 10% in the past six months, but Waitrose is not letting go of its high-end reputation. With Waitrose recently being voted Which? Supermarket of the Year Bailey added that while Waitrose was “leading the market” in terms of its net promoter score, complacency would be a bad route to go down. He promised customers would see a marked change in its confidence as a brand, and what he believes sets it apart – the quality of its food, ethics it supports and top-notch service.

Shoppers will see the supermarket “doubling down on the things it’s already good at and plugging the gaps where customers say we could do better,” Bailey said. When it came to flexing its foodie credentials it would “continue to do so only with even more confidence” – and that would translate into its marketing, he added.

Environmental and ethical enhancements have also been promised. The turnaround plans involve Waitrose bringing forward its pledge to be net zero carbon by 15 years to 2035 – five years ahead of the NFU’s 2040 goal.

“When the NFU set its goal for net zero agriculture by 2040, we were clear that we couldn’t do this on our own,” said NFU president Minette Batters. ”The supply chain has a huge role to play so it’s great to see Waitrose and the John Lewis Partnership being ambitious about playing their part.

“I’m also pleased that Waitrose will be working closely with their farmer suppliers to support and guide them along this journey, as well as sharing their learnings with the rest of the industry.”

It has also vowed to halve food waste in its own operations by 2030, extending the ambition across the supply chain.

Meanwhile the Partnership’s ethical endeavours also extend to its 80,000 partners. While its latest half-year losses of £635m meant there could be no bonus, the workforce has been promised a “double figure” payment once profits reach £200m (in two years), at which time all employees will also receive the real living wage (£9 across the UK or £10.55 in London).

The partnership did not, however, entirely rule out further job cuts or store closures alongside the eight John Lewis and 11 Waitrose stores announced since last July.

When it comes to the wider community, it is making changes to boost social mobility among partners, too, and finalising a pledge to recruit more people coming out of the care system.

Intriguingly, JLP has also identified 20 Waitrose sites for mixed-use development – combining a store with quality and sustainable housing on top to create a stable income for it as a landlord. It believes the ‘build to rent’ market is a reliable new revenue stream of the future, and is looking to furnish properties using John Lewis Home products.

Bhatia adds it is already in discussion with a “number of external partners” about different sites to develop in the future.

With Covid-19 in the mix, Bailey admits there’s “a lot of unknowns” to contend with this festive season. He expects the sales balance to move towards online. Overall the retailer was carrying out “an awful lot of work” in terms of capacity planning and ensuring stores “look and feel safe” for shoppers who prefer the in-store experience.

Waitrose is also determined to get the balance right between keeping customers safe and “bringing the season to life” in-store and online, Bailey adds. “I expect it will be a difficult but positive Christmas.”

Creating a long-term plan in the current retail environment is a tricky task, as customers continually adapt shopping habits around the confines of coronavirus. But with a blend of digitally led convenience and environmentally conscious moves, JLP insists both its brands are fit for the future.