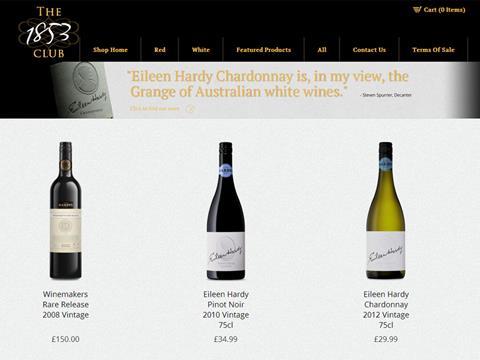 Hardys 1853 Club sells wine directly to consumers over the web

The UK’s largest wine brand has launched a direct-to-consumer retail service for its premium wines.

The new Hardys 1853 Club website from Accolade Wine, which went live last week, will allow members to sign up for notification of new allocations of rare and premium wines from its collection, and the first chance to buy direct from the website. Membership is free, but delivery is charged at £7.99 or free for orders over £50.

The website is fronted by brand ambassador and fifth-generation winemaker Bill Hardy.

A spokeswoman told The Grocer there was increasing demand for Hardys premium wines.

“There are a number of premium Hardys wines that come in very small allocations and can be difficult to buy. We wanted to reward people to seek out top-end wines,” she said. “It also allows us direct communication with the consumer.”

The company has set up a dedicated warehouse and team of pickers to process orders at its Bristol-based bottling plant Accolade Park.

Accolade Wine’s general manager Paul Schaafsma said the launch which would put the company at the forefront of driving the wine category in the UK.

“As a company our mission is to continue to break boundaries for the trade and build bridges with the consumer in order to make wine more accessible to new drinkers, whilst enhancing the value of our brands. I believe that the 1853 Club is an effective way of fulfilling these objectives,” he said. “We are bringing our number one brand closer to the consumer, giving them direct access to Hardys wines and the people behind them.”