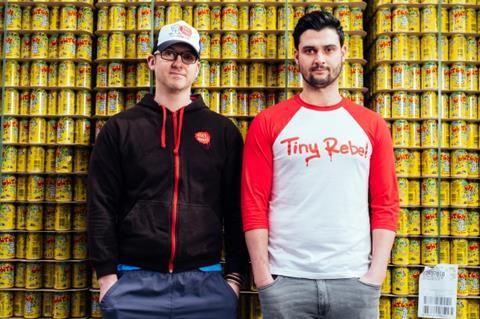 Welsh craft brewer Tiny Rebel has snubbed the Portman Group after its Cwtch ale fell foul of the watchdog for the second time in three years.

Following a complaint from a shopper, the booze industry watchdog ruled this week that cans of the beer risked appealing to under-18s because of the teddy bear design on the can. Cwtch is one of Tiny Rebel’s core beers and a bestselling SKU for the brand.

It comes after the brewer was forced to completely rebrand and launch the ale in 2017, when the watchdog ruled Cwtch’s previous can risked appealing to children and “encouraged immoderate consumption”.

A Portman Group spokeswoman said it was “highly unusual for the Independent Complaints Panel to uphold a product twice within a two-year period but unfortunately they felt there remains a significant risk that the design, although amended, has particular appeal to under-18s”.

While “expressing regret at the impact this would have for the producer” the watchdog recommended Tiny Rebel ditch the teddy bear image from the front of its cans.

However, Tiny Rebel MD Bradley Cummings said Tiny Rebel was “choosing to decline the Portman Group’s request this time around”.

“We were told by the Portman Group that the Cwtch artwork in question would not have been an issue if it was wrapped around a 330ml bottle instead of a 330ml can,” he said.

“Ironically, the majority of craft beer is sold in 330ml cans and therefore their ruling regarding our labelling appears to be a reflection of market stereotypes, and does not adhere to Portman’s own ruling on alcohol labelling.

“We believe that everything we do on our labelling and marketing clearly conveys that this is an alcoholic product – clearly displaying the beer style and abv on the front of the can. Yes, like many others, we have brightly coloured cans, which isn’t uncommon in the craft beer market.”

When Tiny Rebel rebranded in 2017 after its first clash with the watchdog, Cummings estimated the costs to have hit approximately £30,000.

“We obviously disagree with the panel’s decision, but have to do what they say because they have us over a barrel commercially,” he wrote in a post on the brewer’s website at the time.

If a supplier declines to work with the Portman Group following a complaint, the watchdog generally issues a Retail Alert Bulletin to retailers to request they stop ordering it, as well as local authority licensing officers.

The spokeswoman said: “I would stress that we are always keen to work with producers to resolve the problematic elements of a product and a RAB is only ever used as a last resort in cases where the producer declines to work with us to that effect.”