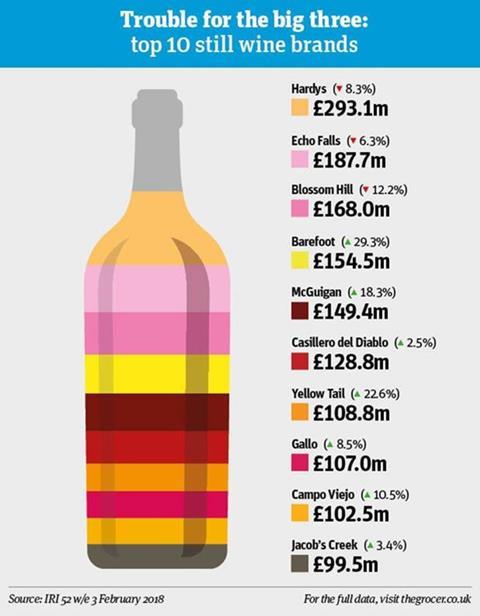 The top three wine brands are down in value as consumers shun middle-of-the-road brands in favour of cheaper own-label alternatives and more differentiated branded offerings.

Casillero del Diablo is up £3.1m, which owner Concha y Toro puts down to highly lucrative media partnerships with the likes of Sky Cinema, which it says are “proven in their ability to drive household penetration”. It is currently hoping to recreate this success with upcoming tie-ups for its two other key brands, Trivento and Cono Sur.

Premium Rioja brand Campo Viejo has grown sales by almost £10m. Owner Pernod Ricard UK says it wants to build on its success with a new Art Series limited-edition bottle encouraging shoppers to ‘Live Uncorked’. It also launched a new Campo Cava into Tesco in the winter, backed by a digital, social and out-of-home campaign.

The future’s pale for Jacob’s Creek and Blossom Hill. Pernod Ricard and Treasury Wine Estate have both added drier, lighter rosés to the two brands in the hope of attracting drinkers who have fallen out of love with sweeter, fruitier rosé. Jacob’s Creek Le Petit Rosé rolled out in September with an abv of 12.4% (rsp: £8/75cl), while Blossom Hill Pale Rosé is even lighter at 11% abv – and cheaper at £6.50/75cl.

However, Toby Magill, head of BWS at IRI, says rosé has generally struggled to make headway in the supers as it becomes more expensive.