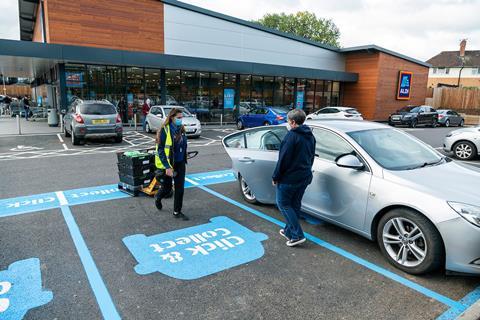 Thousands of customers took advantage of the new click & collect service, according to Aldi

Aldi has enjoyed record Christmas sales, helped by demand for alcohol as a growing number of pubs and restaurants were forced to close.

The discounter has reported a 10.6% year-on-year rise in sales in the four weeks to 24 December. It said the performance had been boosted by strong demand for beers, wines and spirits, both in store and online.

Wine and Specialbuys online were up 75% on the previous year, with 4.5 million bottles of champagne, sparkling wine and prosecco sold.

Meanwhile thousands of customers also ordered groceries online through click & collect and Deliveroo, Aldi said. Both services were launched last year and had been rolled out to about 300 stores between them by Christmas.

“We had a record Christmas with unprecedented demand for our award-winning products as customers pushed the boat out more than ever before,” said Aldi UK CEO Giles Hurley.

“We are expecting significant sales growth this year as we open new stores and bring Aldi to more locations across the UK. With the vast majority of our grocery products now coming from British suppliers, our growth will lead to additional jobs and investment in our UK supply chain.”

Shoppers spent close to £12bn in supermarkets during December, around £1.5bn more than the year before, according to Kantar estimates. All the major grocers are expected to have seen record sales.