Aldi to install 96,000 solar panels at UK stores and depots this year 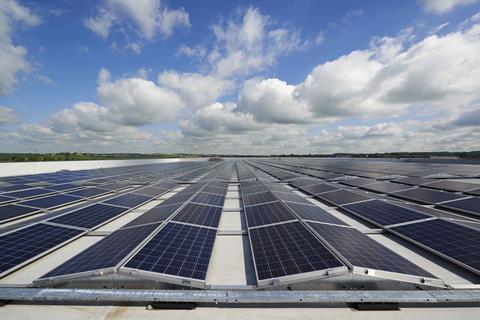 Aldi will install around 96,000 solar panels at its UK stores and distribution centres this year to cut its carbon footprint.

The discounter says the £17m investment will save more than 8,100 tonnes of carbon dioxide.

Aldi has already installed 85,000 solar panels on more than 275 stores and all nine of its regional distribution centres.

It said more than 50 stores would have solar panels installed by the end of the year, meaning the supermarket chain would be able to generate enough electricity a year to power more than 6,200 households.

Aldi communications director Mary Dunn said: “We are committed to reducing our carbon footprint and harnessing the power of solar energy is just one of the ways we’re doing that.

“Installing our 96,000th solar panel means we will be able to save around 8,100 tonnes of CO2 from being released into the atmosphere each year - that’s enough to fill the Royal Albert Hall more than 45 times over.

“It also means that we are using all of our distribution centres and more than a third of our stores across the UK to generate electricity from solar power, marking a further significant step in our journey to reduce greenhouse gas emissions by 30% by 2020, while continuing to grow.”

In 2015, Aldi began a three-year programme to replace all its chest freezers in the UK to more environmentally friendly models.

Last year, it was also one of the first signatories of the Courtauld 2025 initiative - a pledge to work with suppliers to reduce food waste and associated greenhouse gases by a fifth per person by 2025.

A third of its stores now use heat recovered from fridges, chillers and freezers to further reduce energy consumption, allowing Aldi to sell excess energy created back to the National Grid.

“While sustainability is important to us, this isn’t just about reducing our impact on the environment,” added Dunn. “Efficiency is at the core of our business model and green initiatives, such as generating our own electricity and reducing waste, help Aldi provide our customers with the lowest prices on great quality products.”