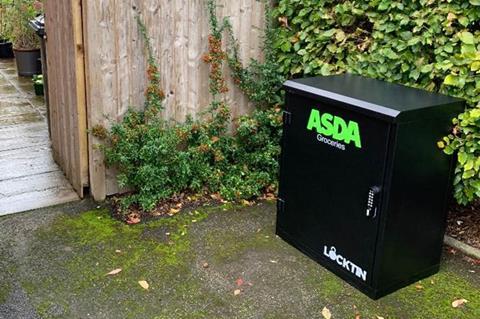 Asda is installing secure ‘delivery boxes’ at customer homes as part of a trial so groceries can be delivered while shoppers are not at home.

Two sizes of box are being trialled in locations in Yorkshire, the north east, Wales and the south, which are fixed outside participant homes, and have capacity for up to four or six totes of shopping.

“As things begin to open up again, the boxes provide a convenient way for customers involved in the trial to take delivery of their regular shop while they are not at home,” Simon Gregg, VP of online grocery at Asda told The Grocer.

When the items are dropped off, the driver enters a code on the box that allows them to access it and make the delivery. They then lock the box which is secure until the customer arrives home.

The boxes are being installed for free by Asda as part of a 12-week “small test and learn trial” for a small group of customers who will be providing their feedback to the supermarket. “We plan to grow the trial further this year,” an Asda spokeswoman told The Grocer.

While they don’t need to be present when a delivery is made, customers are being advised to remove chilled and frozen items within four hours of drop-off.

“The four-hour window is unaffected by either warm or cold weather. We use insulating materials to maintain the correct product temperature on frozen and chilled items stored in the box,” the spokeswoman explained.

The scheme – which is in its early stages – was spotted in an update to Asda’s delivery terms and conditions by Bryan Roberts, retail analyst at Shopfloor Insights.

“This could be a good solution in the longer-term once people start returning to work in offices, as at the moment home delivery has never been more convenient with plenty of people in their homes most of the time. There might be some concerns about security and there are some obvious complications concerning age-restricted items, but the concept does have a degree of merit,” Roberts told The Grocer.

“This sort of solution has been much discussed since online grocery first started and there have been plenty of trials around the world, but not much so far in terms of meaningful widespread deployment,” he added.

In late 2019 Asda hinted at a trial in which delivery drivers would fill customers’ fridges directly, even when they weren’t at home. The concept has been given a limited rollout by Walmart in the US through its Walmart InHome subscription service. Users buy a subsidised smart lock device which is installed for free on their front door or garage door, which is unlocked by drivers using a one-time code. Delivery associates wear a body-cam which livestreams their movements inside the property to the customer’s device.

Asda’s plan appears to have gone no further, despite the supermarket saying to “watch this space in 2020 about where we can take that forward”.

Waitrose had since 2018 been trialling a similar service – While You’re Away – but the supermarket said it had been “now brought to a close owing to the current situation around Covid-19”.

Amazon last week extended its ‘Key by Amazon In-Garage Grocery Delivery’ to all cities in the US where Amazon grocery delivery is available, following a limited launch in November. Users need to purchase a device that digitally unlocks their garage, in which drivers leave their groceries.