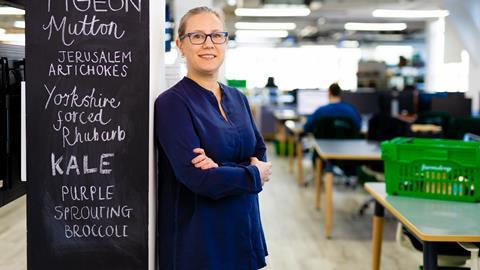 Eleanor Herrin: ‘Why I dropped Amazon for Farmdrop’

Eleanor Herrin worked at Amazon for 17 years. So why did she quit to join Farmdrop? And what changes has she been making as its new CEO?

Perhaps the last thing you would expect Farmdrop to sell is ready meals. Its entire proposition - based on fresh local produce - seems to cater for foodies who cook from scratch, thanks very much.

But new CEO Eleanor Herrin is keen to stress there is method behind the apparent madness of the online grocer’s ‘Made by Farmdrop’ meals, launched last summer. “We’re focusing on products from our most sustainable producers, and we’re also reducing food waste because often we use glut that would’ve been thrown away to create the meals,” she says.

The tack seems to be working. Herrin reveals one in six orders now include a product from the ready meals range, which is set to hit 125 SKUs by the end of the year.

Plus, the meals form part of a wider strategy. Herrin is on a mission to broaden Farmdrop’s proposition, which means she is also planning to launch a recipe box service in the first half of the year. “We’re trying to cover all aspects - cooking from scratch, not cooking at all, and now we’re getting into the meet in the middle spot with recipe kits,” she says. In essence, it’s no longer just for scratch-cooking foodies who shop at farmers’ markets.

Arguably, that change in approach was necessary. When Herrin joined in summer 2018, Farmdrop - like many of its peers - was nowhere near making a profit. It made a £7.7m loss in 2018, and its 2019 results (due in the next few weeks) are expected to report another loss.

Despite those figures, Herrin is confident the business will reach profitability in the next 18 months. “We’ve been growing. This quarter is our biggest quarter ever. Things are going well.” That’s thanks to a “tonne of work” over the past year to grow the customer base and increase average order values.

Additions such as ready meals and recipe boxes are only a small part of this work. In the background, Herrin has been busy expanding Farmdrop’s core offering to ensure it has a “credible grocery selection” that spans everything from health & beauty to petfood and household cleaning supplies. Since she took over as CEO, Farmdrop has more than doubled its number of SKUs to 5,000. “I wanted to build on the idea of an online farmers’ market and move more towards the range of a sustainable supermarket, so people can do their full weekly shop,” she says.

For Herrin, this tactic has been crucial to building up a loyal fanbase. Farmdrop now has 10,000 customers and 80% of its revenue comes from repeat buyers.

Plus, the size of each order has increased thanks to the introduction of minimum order values - which Herrin implemented as soon as she joined. Despite “losing a few customers who’d been placing £15 or £20”, she believes the tactic has paid off, with the average order value up to £85.

Crucially, that growth isn’t coming at the expense of core values. As Herrin stresses, the concept of a “sustainable supermarket” is the driving force behind all her changes. That is because of - rather than in spite of - her background working at Amazon, she says. Herrin spent 17 years at the behemoth, helping it expand into new areas including online grocery.

One of the reasons she left was because of the lack of sustainability on the food side of the business. “I learned so much at Amazon, but when I got into the food area, it just wasn’t quite the way that in my dreams I would see a food service working - the packaging, the types of food we were selling,” she says.

By contrast, the ethos of Farmdrop founder Ben Pugh felt far more appealing. “I joined because of Ben’s mission,” Herrin says. “I felt the bones of the company were very strong. The type of work we do is not just day-to-day work, it takes your whole soul to do what we do.”

So it stands to reason that Herrin is keen to push the eco-friendly credentials of Farmdrop. “We’ve taken the decision that we’ll take the most sustainable route across the range,” she stresses. “Fruit & veg, for example, is mostly organic or at least from producers who focus on biodiversity and other sustainable outcomes.” It’s this kind of commitment that Herrin believes sets the online business apart from the larger grocers.

Farmdrop tries to focus on seasonal produce wherever possible. On one of the walls in its offices, Farmdrop lists what’s in season (venison, pollock, kale, purple sprouting broccoli and pigeon were just a few of the foodstuffs listed when The Grocer visited).

However, Herrin admits that’s not always possible. “Way back when Ben tried to launch the grocery store with no bananas, it turns out people will not shop with you unless you sell bananas. And they’re not local at all. But we feel really good about the bananas we have because they support a really great community in Peru.”

Potted CV: Joined Amazon in 1999. Spent 17 years in various departments, and was instrumental in the international expansion of the company’s now globally recognised food delivery services - Amazon Fresh and Amazon Pantry. Joined Farmdrop as CFO in summer 2018 and was promoted to CEO in September 2019

Favourite books: Two books on farming: Miraculous Abundance, by Charles and Perrine Hervé-Gruyer, which charts how a couple with no experience of farming took on a plot in Normandy and created a whole new way of working. I’m also a fan of Wilding, by Isabella Tree, which gives an insight into how a Sussex farm returned to nature.

From EVs to crates

This commitment shapes the way Farmdrop delivers groceries. Currently 85% of its fleet is electric - “apart from a region on the outskirts of London the current EV can’t reach” - but in the next year it’ll be 100%. Plus, it tries to deliver in crates wherever possible.

“Many services - whether meal kits or other grocery orders, spend a lot of money every order on things that are one-way, whether it’s the bags, the insulation, boxes,” says Herrin. “We have crates - we can use them thousands of times, and then we just have loose produce. We help customers unload into their kitchen if they’d like us to, or they can bring bags to the door.

“It works, customers don’t mind it. Once they know how expensive that stuff is and how that’s incorporated into the cost of their groceries, as well as the environmental impact, it’s kind of a no-brainer.”

Where packaging is necessary, Farmdrop tries to avoid single-use plastic. “We’re influencing where we can - we’ve worked with some of our meat producers on alternative packaging. We’ve also got rid of those horrible polystyrene trays you find in butchers’ shops.”

Herrin is always on the lookout for how Farmdrop can improve, too. Most recently, it called on its producers to switch to renewable energy, which has had a “huge impact” on their overall sustainability. “That was one aspect of the story we hadn’t thought about but can meaningfully influence,” she says. “It left us excited that we’re on the right path but that we have more work that we can do that’s actionable.”

Talking of more work, Herrin’s long-term ambition is to expand outside London. “One of the things we’ll do this year is experiment with a small transportation facility in south-west London that will open up another 400,000 households south of the M25. But that also will also give us a blueprint for how we, in a very low fixed-cost way, potentially can service towns outside of London but from our London hub.”

Well, if Farmdrop can sell ready meals to foodies, there’s no reason why it can’t find success outside the cosmopolitan London crowd.