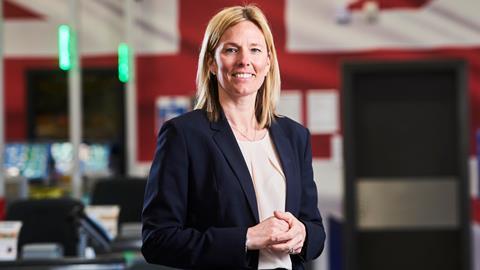 Big interview: Julie Ashfield on how Aldi has stayed calm amid the coronavirus crisis

Aldi has done it again. Last week, the discounter secured top spot on the Groceries Code Adjudicator’s league table for the seventh year running. It may seem baffling to some. It’s easy to assume that the lean, cost-efficient model of a discounter leaves, if anything, less room for building good relations with suppliers. The opposite is true, argues Aldi buying MD Julie Ashfield.

Ashfield joined Aldi as a graduate area manager in 1999, just nine years after its first store opened in the UK. Since then she has seen it transform from a rapidly growing but relatively minor operator to the big four threat it is today.

By taking suppliers on the same journey, Aldi has built up strong relationships, says Ashfield. “In the early days, we had to help suppliers to understand the benefits of working with Aldi when they were not aware of the opportunity and growth we could deliver,” she says. “This has led to lasting partnerships and an appreciation of the way Aldi conducts business very differently from the rest of the market.”

It’s because of the discounter model - rather than despite it - that Aldi regularly tops the GCA rankings, Ashfield believes. It brought a simplicity to supplier relations that others struggled to match. “At a time when many of our competitors were using complex listing fees and charges to drive margin, we stood out as being straightforward to deal with,” she says. “We agree a deal and we stick to it.”

Of course, 2020 has put unprecedented pressures on these relationships. The battle to keep shelves stocked with essentials might have strained even the most solid partnerships to breaking point.

But again, being a discounter has been a key advantage, says Ashfield. The panic buying at the start of the crisis - which saw shoppers clear the shelves of loo roll and canned goods - led to widespread rationalisation to focus on essentials. In contrast Aldi, with its roughly 2,000 lines, “hasn’t had to adapt [its] range significantly because it’s already very focused and efficient”.

“Having fewer lines makes it easier to manage spikes in demand”

“We consolidated a handful of lines at the peak of the crisis, like removing one pack-size variant on key lines, to enable suppliers to optimise productivity, but this was done in close collaboration with our suppliers,” Ashfield says.

“We’ve seen the rest of the market consolidate ranges in certain categories because of supply challenges. This is inevitable when you have multiple pack formats, variants and sizes of one product type.

“It led to significant shortages for many other supermarkets because of replenishment complexity. Thankfully, having fewer lines makes it easier to manage spikes in demand.”

The tightly controlled range “allowed us to focus on working with key suppliers to increase volumes into the business and keep up with demand”, she says.

Yes, the crisis has demanded hard work from both suppliers and Aldi itself, but the key to mutually beneficial relationships has been “no different during the crisis from at any other time” Ashfield argues.

“It’s about honesty and integrity with both sides of the relationship working to help each other.

“Our suppliers have worked incredibly hard to help maintain availability for our customers, for which I am incredibly grateful. We have worked hard to support them too, for example, by moving to immediate payment terms for suppliers with a turnover of under £1m.”

Potted CV: Joined Aldi in 1999 as an area manager after graduating from Sheffield Hallam University. After three years, moved into the buying team at head office and was group buying director for chilled for eight years before being promoted to current role.

Best career decision: Joining the Aldi Graduate scheme back in 1999. I can’t recommend the scheme highly enough for anyone looking to embark on a career in retail.

Worst career decision: I’ve been very fortunate in my career and don’t regret any of my choices.

Least favourite meal: Anything with oysters.

The last book you read: As a mother of three, my reading isn’t particularly highbrow. The last book I read was The Smartest Giant in Town - my daughter’s favourite.

Supplier relationships aren’t the only area where Aldi sees itself at an advantage. Aldi’s constant focus on efficiency has also ensured an adaptability at store level.

“The simplicity and efficiency of our model has been a real advantage,” says Ashfield. “For example, our store colleagues are trained to work in every role, from operating the tills to stock replenishment. This flexibility has been critical to keep stores operating as smoothly as possible [in the crisis].”

Plus, its pricing strategy has remained essentially the same. At the mults, promotions have fallen sharply. Data compiled for The Grocer by Assosia in April showed promotions across Tesco, Sainsbury’s, Asda, Morrisons, Waitrose and Ocado plunged by almost half - from 35,197 in the week beginning 16 March to just 18,838 in the week starting 6 April.

But Aldi had fewer of these to shed. “We don’t run promotions apart from our weekly Super 6 Fresh Produce offer and our Best Cuts Meat programme. Our core range, merchandising and pricing structure stayed the same throughout the period of stockpiling.

“The only minor change we made was to sell some of the bulkier Specialbuy items online instead of in stores, to allow colleagues to focus on replenishing the essentials that customers needed.”

The millions of people stuck at home are still keen to buy garden chairs and barbecues, and the move online has not affected sales, while helping social distancing in stores, Ashfield claims.

Of course, it’s not entirely business as normal. NPD initially took a hit from the pandemic, Ashfield admits. “There were a few weeks when all of our resources were put behind ensuring supply kept pace with demand but we never lost sight of the need to continue our NPD and innovation programme,” she says. “For example, we continued our planning for Christmas.”

And it is still planning its expansion. Aldi is in the process of doubling its London estate to around 100 stores by the end of 2025, using its new ‘Aldi Local’ format. At this time, these stores may not be in the best position - with the loss of food to go sales blunting sales growth at M&S and others reliant on travel and city centre locations. And Ashfield admits food to go sales are of greater importance in Aldi Local stores. But she is confident in the long-term prospects. “Demand will inevitably recover as lockdown is eased and people return to more normal working and travel patterns,” she says.

Aldi is also expanding into new areas in light of the crisis. The rapid growth of online shopping, which accounted for 11.5% of all grocery sales in the latest Kantar figures, has proven an advantage for the supermarkets. In the 12 weeks to 16 May, Tesco and Sainsbury’s saw sales grow at a faster rate than Aldi for the first time in a decade, according to Nielsen. As they watched online demand rocket, Aldi’s online offering remained limited to Specialbuys, alcohol and a few ambient lines such as coffee pods.

The discounter finally responded last week, when it launched online grocery through Deliveroo, in a single Nottingham store trial that is set to roll out to at least seven more. So, does it mean Aldi has finally arrived in the digital grocery age? “It’s very early days,” Ashfield admits. “We are interested to understand the level of customer demand and how well we can manage the pick and pack process in stores.

“The key test for any new initiative at Aldi is whether it can be incorporated into our efficient operating model.” Because at Aldi, efficiency is king.