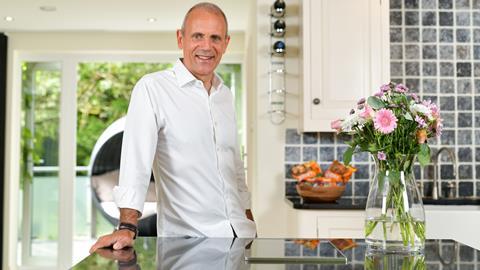 Bertacca started his role on the factory floor. Now he’s turning his attention to expanding the brand, and has saving the world in his sights

It would be fair to say 2020 took an unexpected turn for Quorn’s new CEO Marco Bertacca. Prior to taking over from long-serving boss Kevin Brennan in January, he had pursued a globe-trotting food industry career that saw him work in the UK, US and – for the past decade – across Asia with Dutch dairy giant FrieslandCampina.

In fact, he was in the Philippine capital Manila, where he ran Friesland’s Alaska Milk Corporation, when the opportunity arose to take over at Quorn. That meant swapping sunny climes for Quorn’s HQ in Stokesley, Middlesbrough. It was certainly a culture change for the engaging Italian. “When I arrived, I had nothing,” he says. “It was tough, I’d moved from the sunshine and sea of the Philippines to the north east of England. It’s pretty dark up here at that time of the year.”

He was also alone, with his wife and daughter still in Manila and his two sons away at university. So Bertacca – an “extrovert who gets his energy from being with people” – decided to get to know his new colleagues by working shifts in Quorn’s factories. “I did a week in one plant and another week in a second plant,” he says.

Few guessed that he was the boss. “I asked my people not to tell anyone, and because I was moving stuff around, cleaning stuff and pouring things into mixers, I had the opportunity to meet a lot of staff. They understood I was foreign so they would say, ‘Where are you from?’ One even asked me if I was a temp!” he recalls. “When I said I was the CEO, he just said, ‘Yeah, yeah, yeah, let’s get on with it’.”

Meeting Quorn workers on the factory floor was a “great opportunity” for a people person like Bertacca. But that knack for making personal connections was soon disrupted as the pandemic took hold.

Potted CV: Worked as a supply chain manager for Unilever in the UK from 1994 to 2000. Worked for CSM Bakery Solutions from 2003 to 2011 before joining FrieslandCampina, where he worked in the Netherlands and Asia, including as MD of Alaska Milk Corporation from 2017 to 2019

Meat eater or not? I’d call myself a flexitarian. I probably eat meat once a month. Meat is not the problem, it’s just the sheer industrial scale and perspective of it. If we continue this way we’ll just destroy ourselves.

Amid the restrictions, he went from the camaraderie of the factory floor to the isolation of a computer screen in his Airbnb cottage rental – one that was supposed to be temporary, but ended up lasting six months. “That was more challenging,” he admits. To keep in touch with staff, he started recording regular videos to help keep them motivated.

That motivation was certainly needed as the team grappled with the challenges of Covid-19 alongside new pressures on supply. A successful 2019 and larger than ever Veganuary in 2020 – a feat that has been repeated this year – meant the meat alternative category had “experienced unprecedented growth”. So Quorn had entered last year with far lower-than-expected stock levels, Bertacca says.

“The team was extremely busy installing a new line to increase our capacity, as we could see the [continuing] rise in demand coming. But it’s fair to say we had some challenges in commissioning that line so it didn’t exactly go to plan,” he admits.

That capacity crisis, coupled with high staff absenteeism at the height of the pandemic’s first wave, meant the business had to play catch-up over the spring, leading to shortages of key Quorn SKUs across the mults.

As a result, year-on-year volume sales dropped by 7.8% to 6.9 million units during the 16 weeks to 11 July [Nielsen]. Those initial supply shortages were exacerbated by a depot changeover, which left about 25 out of the 40 products it sold in Morrisons listed as out of stock for several weeks last summer.

The net effect over the full year was an almost 10% slump in volumes, according to The Grocer’s 2020 Top Products Survey [Nielsen 52 w/e 5 September]. Meanwhile, value sales edged up just 0.9% – significantly below the overall meat-free category’s growth rate of 28.8%.

However, Bertacca stresses those supply problems are now firmly in the past. Quorn is due to reap the benefits of a £150m investment in production over the next three years from parent company Monde Nissin, and is looking ahead with confidence. “We are now stepping into 2021, not only with the proper levels of stock but also with some incredible plans,” he says.

Indeed, the brand kicked off Veganuary with the launch of a new range of Quorn ingredients called Makes Amazing, alongside a major marketing push. Clearly, it isn’t worrying about running out this time around. “We have developed a 40% increase in capacity and are aiming to add another 40% in the next three years to come,” Bertacca adds, as part of a strategy that will be centred on an “ambition to feed the planet”.

All this comes back to Bertacca’s long-held belief that the food industry can be a force for good. It is, he says, very much borne out of the love many Italians have for food. After all, “you can spend an evening with Italians having dinner just talking about it the whole night”, he says.

But it was when Bertacca worked in the Philippines – a country where he says more than 90 children still die every day from malnutrition – that the feeling intensified into a career objective. He became determined to provide “accessible nutrition” for the masses. Luckily, he found the bosses at Monde Nissin shared his vision. With the aim of making Quorn a truly global and accessible food, they are now backing him to take the next step in the brand’s development. A crucial part of this is upping its sustainability credentials.

“I joined a company with a huge heritage, a trailblazer in meat alternatives 35 years ago. And Quorn is something that is absolutely unique, that can be good for health and for the planet,” Bertacca explains. “Mycoprotein uses 90% less land and water than beef, produces less greenhouse gases, and we believe can play a big role in creating a more sustainable world.”

All this is backed up company’s new sustainability action plan, called ‘+8 30’. Pivotal to that is Quorn’s aim to become a carbon net positive business by 2030, by which time it will be able “to provide eight billion portions of our food for the planet”, he says.

This eco-friendly angle is set to come through in its marketing. “We will be shouting much more about our protein in 2021 and its positive impact on health and the planet,” says Bertacca.

And in terms of expanding its reach, Quorn has plans to enter new markets. A new global partnership with Liverpool FC and ongoing tie-ups with the likes of KFC and Greggs, plus the recent appointment of a team of development chefs, will also help the brand grow and “embody the role of delivering innovation”, he adds.

It’s clear that Bertacca is genuinely passionate about Quorn. That belief in a brand “with purpose” seems to be contagious. Now he is back with his family – thankfully, he’s finally out of the Airbnb – his three children are “proud of me again, like they’ve not been for some time during the teenage phase”, he says.

So despite the challenges of the past year, Bertacca is feeling pretty positive. “The past year had been difficult, but we managed to look after our own people and kept everyone safe,” he says. “This will be the year when we start to create a movement and create a collective action to try and resolve some of the problems we have in this world.” At a time when the world is facing so many problems, you can’t fault his ambition.