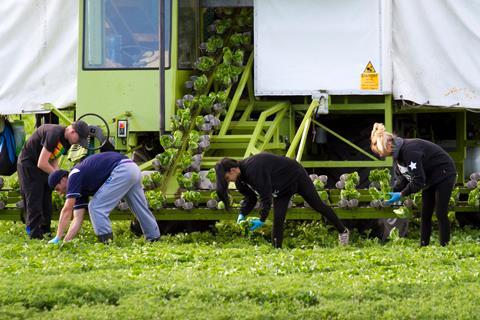 The fight against modern slavery could be undermined by a lack of resources, fresh produce supplier G’s Group has warned.

And the government’s proposed new immigration laws could further exacerbate the problem, the NFU has suggested.

Home Office-backed enforcement body the Gangmasters and Labour Abuse Authority was struggling to carry out its remit due to a lack of funding, said G’s HR director Beverly Dixon. “Its resources are extremely tight.”

The GLAA’s funding has risen since its remit was expanded to allow labour offence investigations in 2017. However, its costs have grown at a greater rate.

This had resulted in fewer audits, Dixon claimed, as G’s prepares to launch a cross-sector campaign designed to tackle modern slavery in fresh food supply chains.

It comes as new immigration laws have increased risks, warned NFU horticulture and potatoes board chair Ali Capper. “If you make the sector short [of labour] the black market will fill that space. I’m not optimistic.”

Meanwhile, the GLAA failed to meet its targets for completing 80% of licence applications within 30 days, managing to only process 23.5% in that time, its annual report said.

It also wasn’t able to complete any investigations into persistent non-compliance, despite having a target of closing 80% of cases within 30 working days.

A Home Office spokesman insisted the GLAA was “making good use of its new powers” and widened remit. It identified 1,658 potential victims of labour exploitation last year, 300 more than the previous year, he added.

“We have increased the resources the GLAA receives to support its important work and we committed to stamping out this abhorrent exploitation.”

But it was “stretched without a doubt”, said Marc Stanton, director of campaign body the Slave-Free Alliance. “When we’ve spoken to companies, they say there have been instances where they’ve reported suspicions to the GLAA and they don’t seem to get acted upon for a long time.”

It comes at a crucial time for the body, which is currently the subject of a public consultation that could ultimately lead to its merging with other enforcement agencies to form a wider employment law enforcement body - a move Stanton warned could lead to a loss of emphasis on modern slavery.

G’s Group, which directly recruits just under 3,000 seasonal migrant workers, is seeking to take a leading role in combatting modern slavery in the food supply chain.

At the end of January, it hosted a conference to discuss the issue, attended by growers, processors and retailers. And in the coming months it is set to collaborate with M&S on the development of a cross-sector intelligence sharing platform.

The move comes after the Cambridgeshire-based firm was implicated in Operation Fort last summer – a police operation which uncovered the largest modern-day slavery network ever exposed in the UK. Between 400-450 workers were exploited by a gang in the West Midlands, with six found to have worked shifts for G’s.