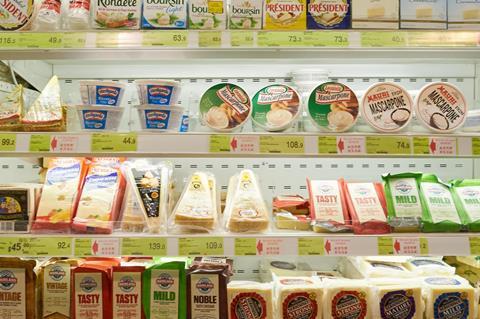 Exports of British dairy products to China could be derailed over the relatively small amount of £45,000, after Defra declined to cover the costs of a Chinese inspection trip.

Chinese government officials are due to visit the UK for a series of inspections across the dairy sector in September to ensure exporters have appropriate quality and control systems in place.

However, the UK is expected to cover the cost of the visit, including all flights, hotels, travel and subsistence – amounting to a bill of about £45,000, said Stephen Jones, MD of cheese exporter Somerdale International.

Despite the government, Defra and Michael Gove waxing lyrical about Britain’s post-Brexit export opportunites, Defra is refusing to pay anything towards the inspection visit, he claimed.

“In addition, it seems that they are also not willing to play an active role in helping to co-ordinate the inspection visit, supply essential translators and assist all dairies and processors to meet the requirements of the inspectors,” Jones added.

A Defra spokeswoman said it was “committed to supporting our food and drink industry grow more, sell more and export more British food”. However, she stressed it had long been government policy that inward inspection visits should be “funded by those who will benefit from the visit” – a principle that was also accepted and applied in other livestock sectors.

But given Defra had been allocated about £100m by the Treasury for Brexit-related activity – and had spent almost £22m on preparing for an EU exit since October, according to its own data – its policy was “not only unfair, but incredibly short-sighted”, Jones said.

“This is about the principle of having a joined-up approach to exporting”, he added - pointing out the businesses involved were relatively small and had already invested heavily to open up the market.

“This just articulates the government is not adopting an export mindset, and has no joined-up food and farming vision.”

Harris, who has written to the secretary of state for Wales to complain, said: “It is not only the cost, but the principle of Defra’s decisions which is really upsetting. It shows that their knowledge of how hard and how expensive it is to get into this market is extremely limited.

“To move UK dairy products into the Asia Pacific region has enormous challenges, but also benefits in the long term, for our UK processors and most importantly our primary producers.”

The issue has now been taken up by the Dairy UK board, which has pledged to ensure the inspection trip does go ahead.

“Dairy UK is establishing which of our members export goods to China so that we can find an appropriate funding solution for the Chinese inspection visit to go ahead in September,” said a spokeswoman for the trade body.

Defra stressed it “and other UK competent authorities and delivery bodies” would provide “significant resource before, during and after any visits to support the shared aim of achieving the best possible outcome for UK dairy exporters”.