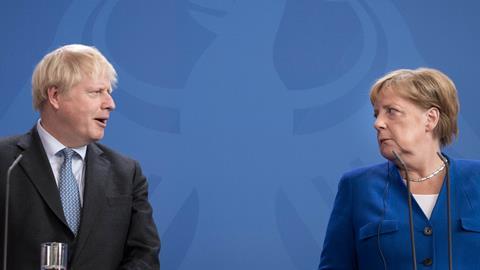 What would Boris Johnson’s Irish border plan mean for food and drink?

Is agreement over the plans as “overwhelmingly unlikely” as European leaders suggest? Or could they yet be a step towards avoiding no deal?

Reports suggest EU negotiators were so nonplussed by Boris Johnson’s proposed solution to the Brexit deadlock, they asked if a section on proposals for customs arrangements on the Irish border was a printing error.

But is agreement on Johnson’s plan for the border quite as “overwhelmingly unlikely” as European leaders suggest? Or could they yet be a step towards avoiding what the industry dreads most: the prospect of no deal?

Under the proposals, Northern Ireland would stay within the EU’s single market but, along with the rest of the UK, leave the EU’s customs union.

This gets around one of the key objections to Theresa May’s notorious backstop - which committed both Northern Ireland and the UK to remain locked indefinitely in the customs union.

However, while removing the threat of the need for regulatory checks on goods crossing into the Republic of Ireland (a third of which is agri-food), the proposals effectively mean businesses face two borders: one on the Irish Sea, another on 300 miles of border and 208 crossing points between the two countries.

The proposals are, as many point out, nothing if not sketchy. “They are so sketchy they look like Boris might have drawn them up with crayons,” says Seamus Leheny, Northern Ireland political advisor for the Freight Transport Association (FTA).

Yet there are key elements upon which business leaders can agree.

Under the plan, the UK leaves the EU on 31 October, with the original transition period staying in place until 31 December 2020.

Once the transition ends, the introduction of a zone of regulatory compliance across Northern Ireland and the EU would mean no need for regulatory checks and related infrastructure at the border.

Are you ready for a no-deal? Food & drink’s biggest Brexit questions answered

Northern Ireland remaining in the single market would require goods being checked at key British ports of Liverpool, Heysham and Cairnryan, to ensure they comply with EU standards. However, this is not widely seen as a source of major disruption.

“From a logistical point of view this works for us,” says Leheny. “This will happen when we’re at the dock and the wheels aren’t turning on the trailer.”

However, some argue that while there would be little disruption on day one at the ports, with companies aligned to EU standards, that would change over time.

“Goods going from GB to Northern Ireland, and Ireland, would begin to face full third-country checks over time,” says an FDF spokeswoman. “Animal products would need to have an export health certificate and enter the EU via a border inspection post, potentially with 24 hours pre-notice provided.

“The 24-hour notification requirement could see lorries having to wait around before they can enter Northern Ireland. This will add friction and cost to GB exports that will impact the competitiveness of this trade, likely making them no longer commercially viable.”

But the biggest headache facing companies under Johnson’s plans is the prospect of customs checks at the Irish border.

The government pledges to utilise modern technology, such as electronic tracking devices, and have “minimal” physical checks, which would “never” be carried out at the actual border.

It moots “trusted trader” arrangements, allowing authorised companies meeting certain criteria to have simplified customs procedures - and in theory checks at warehouses, either where the goods originate or end up.

But depending on the outcome of subsequent trade negotiations, as well as customs declarations and other Brexit costs, sources suggest Johnson’s plans add up to a recipe for delays, diversions and added fuel costs.

“These processes require new infrastructure on company premises for transit, or companies getting to grips with new and complex pre-declaration systems which will be very burdensome for SMEs,” says the FDF spokeswoman.

“Goods would likely need to be notified when leaving the premises and then have to wait for clearance when they arrive at the destination before they can enter free circulation.”

Such requirements, the FDF claims, would make it impossible for suppliers to respond quickly to customer demands. “Sudden demands from consumers and retailers can [currently] be dealt with, as there’s little friction in the supply chain, but adding these customs processes will change that,” says the spokesman.

“Under Johnson’s plan, companies will go from facing one border in the event of a no-deal between the UK and Ireland, to facing two separate borders. This would be a nightmare for businesses operating across these borders.”

However, Brian Irwin, chairman of the Northern Ireland Food and Drink Association, says substantial elements of the proposals are workable, “given enough time”. Such light-touch regulation has already become commonplace across organisations such as the FSA.

“I think for the big guns in food and drink this sort of stuff is workable. For example, all the big meat people absolutely would know what they were doing when it came to the sort of trusted trader arrangements that have been suggested.

“I have far greater concerns when it comes to the many smaller companies, especially if there are tariffs imposed which encourage non-compliance.”

The government promises “special provision” for smaller companies to try to ensure they have the benefit of simplified procedures enjoyed by bigger rivals, while the system would “target the traders most in need of support” and “ensure compliance as far as possible”.

But is that code for a smugglers’ charter?

“With a 300-mile border, the government saying it will have only minimal checks and with no physical checks going to be carried out anywhere near the border, there has to be a huge risk of non-compliance,” says one supplier source.

Organisations like NIFDA warn criminals will be rubbing their hands at the prospect of exploiting tariffs imposed by the EU on goods coming from the north as an incentive for industrial-scale fraud.

Johnson’s proposals would supposedly maintain the spirit of the Good Friday agreement - the lack of infrastructure at the border for one. However, his suggested deal, even if EU leaders agree the border arrangements, would require approval every four years from the Northern Ireland Assembly to continue.

As one logistics source puts it: “Imagine you are a company whose business relies on crossing the border. There are six months to go before the assembly has to agree this arrangement continues. How then do you get investment, what sort of long-term security do you have?”

Yet, with three weeks left before a possible hard Brexit on 31 October, long-term security will be something that to many in the food and drink industry seems a distant memory.