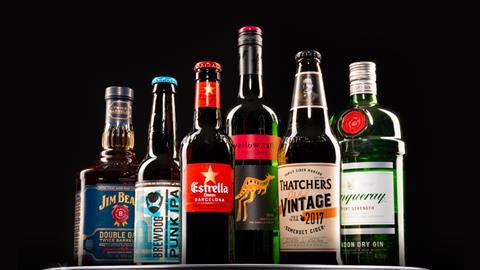 Craft beer. Pink spirits. Spanish lagers and enough pricey apple cider to knock out a small elephant: this is the future of Britain’s booze aisles.

That’s the message from this year’s Britain’s Biggest Alcohol Brands top 100 ranking. The age of piling them high and selling them cheap is well and truly over. It’s a far cry from the 4% lager-soaked days of yore. And it’s got nothing to do with these supposed ‘snowflake’ millennials that certain tabloids claim just can’t hack their grog any more.

Yes, Brits are drinking less. Overall volumes of the top 100 brands have fallen by almost 14.8 million litres. A legion of pints, drams and consolatory glasses of wine have been turned down over the past 12 months.

But that’s not strictly bad news. Because while Brits might be displaying more moderation with how much they’re glugging down, they’re spending a considerable amount more cash when they do: combined sales of the top 100 have actually grown £349m to £9,420m.

Which has proved deadly for a whole host of mainstream and value brands across the BWS spectrum that used to make a killing thanks to their low price, such as Foster’s (4), Hardys (7), and Glen’s (19). Meanwhile posher (and craftier) brands like Estrella Damm (65), Thatchers (46) and the unstoppable BrewDog (40) are raking it in. “What we’ve got is value growing ahead of volume and premiumisation really kicking in while the bottom end is clearing out,” says Pernod Ricard UK commercial director Chris Ellis. “If you were to segment the market into premium, mainstream and value, in all categories that slither at the bottom is on the way out.

“Out-and-out value propositions will always have a role to play but their relevance in the market is definitely diminishing because the consumer trend is very much towards the top end.”

Still, the picture is far more complicated than consumer tastes simply moving away from cheap towards premium. In many cases, retailer decisions have taken their toll on less pricey booze. Hardys and Foster’s, for instance, have faced significant delistings in the mults over the past two years amid rumoured pricing disputes. Retailers are also selling less on promotion, which many value brands have traditionally relied on to shift SKUs at high volumes.

And there are some serious exceptions to the premium rule. Take the performance of Diageo mainstay Gordon’s. Craft gin might be making all the headlines with its army of kooky brands, uber-trendy distillers and unflinchingly high price tags, but Gordon’s (6), with an average price of £18.13 per litre for the core gin or £20.90 for its massively popular Pink variant, has racked up the greatest gain of any brand in the top 100.

Carling, too, has grown by almost £30m. In spirits, Jack Daniel’s (9) has had another stonking year. You’d be hard-pressed to describe any of these brands as high-end. So what’s really going on? And who are the new rulers of Britain’s BWS aisles? Here’s your guide to the key trends driving booze sales in 2018.

Click here to view the top 10 alcohol brands in Britain

Being brave seems to pay off in today’s booze aisles. Pernod Ricard’s Ellis ranks experimentation alongside premiumisation as a trend. “NPD and innovation is so important to keeping the category vibrant and, now that it is landing at scale, as a supplier you can have faith that you can do more interesting and different things.”

Some of this year’s biggest winners have been brands that have moved boldly into other categories - particularly cider. Smirnoff’s (2) success this year hinged so heavily on its three-strong range of flavoured ciders that, had they not been around to keep it afloat, the overall brand would be in decline. Carling’s highest-growing SKU was its Black Fruits Cider rather than lager. And Jack Daniel’s (9) cider pulled in almost half the growth of its core whiskey.

“It’s natural that these trademarks can exist and be successful in new categories as long as they bring something a bit different to it,” says Diageo off-trade sales director Guy Dodwell.

Even the wine world - famously averse to innovation - is getting a bit more experimental. Echo Falls, for instance, has moved its popular Fruit Fusions range (which is steadily outgrowing its core wine) into vodka, while Jacob’s Creek has unleashed a premixed ‘Aperitivo’ cocktail to rival Aperol.

Have we hit peak gin?

“A massive amount of the growth in gin in particular is coming from brands that are either brand-spanking new to the market, or ones that have been around a while but are now generating a bit of scale,” says Ellis.

Opinion: The success of gin shows that shoppers value booze

But behind the scenes, many in the trade are beginning to suspect we have reached ‘peak’ gin for smaller players. That the biggest innovations in gin over the past six months have all been coloured, flavoured gins, gin liqueurs and RTDs suggests newer clear gins may be entering a crowded market.

“I think the fizz in the gin & tonic industry may go flat,” says one senior industry source. “The market can’t actually sustain this many of them and, to be honest, quite a lot of them aren’t very good - especially if you’re having it made for you by somebody in Birmingham under cover of darkness and then claiming it’s a rare, small-batch recipe.”

Is whisky the new gin?

Pernod Ricard’s Ellis says it could be time to start thinking about a successor to gin’s throne. He highlights signs of a burgeoning boom in whisky and the “green shoots” of a craft movement in vodka.

“If I had to take a bet I would go with whisky next. Because it’s super versatile and has a wide variety of propositions. Gin has always been a big category but for a long time was declining, however it had enough scale in it that as soon as you began to add something interesting it was easy to grow and develop. Whisky is equally big and in much better health than gin was before the boom.”

There are signs of this happening already. The past year has seen a slew of younger whisky brands - often English (such as Cotswolds Distillery or The Lakes Distillery, both of which have launched their first single malts this year) or coming from other non-traditional whisky regions such as Scandinavia or South Africa - hit the market.

Meanwhile, thanks to the current vogue for Americana, bourbon brands such as Jim Beam, which has upped its value sales by almost a quarter, and Bulleit, which is making a serious dent on the craft side of things with value sales of £4.7m this year, are surging.

“Remember,” says Ellis, “traditionally consumers would have one bottle of gin in the cupboard at home whereas now they have a range. Flow that through into the buoyant areas of the whisky category and it makes complete sense to have an Irish, a bourbon, a Canadian rye for instance in your cabinet.”

After smashing its way into the mults last year, craft beer has come of age. BrewDog and Hop House 13 may be the sub-sector’s most notable players in the top 100 this year, but there are serious contenders waiting in the wings. Camden Town Brewery, for instance, which was bought by AB InBev in 2015, has upped its value sales by 192.2% to £5.1m - no doubt boosted by the distribution heft commanded by its parent company.

Craft mainstays are beginning to emerge while those that can’t demonstrate long-term growth prospects or product consistency are falling away, says Camden founder Jasper Cuppaidge. “What’s interesting to me is that once people have started drinking these beers, they are sticking with them. Very strong brands have appeared within a very short space of time.” In short, craft beer’s getting its own ‘big boys’. “There’s always going to be space for innovation and craft, but consumers are going to come back to the ones that taste fantastic. Working for supermarkets and a wider audience, you have to nail quality and consistency.”

Still, the craft market is in rude health: the top 30 craft brands have added an impressive £72.1m to their combined value, an increase of 51.4%. The big boys are more confident than ever in their ability to grow craft to scale: Heineken has acquired a significant stake in London brewery Beavertown and is ploughing £40m into a new brewery for it.

And yet for all the talk of ‘craft’ and ‘premium’, this year’s biggest winner in beer is Budweiser (3), whose phenomenal growth was accelerated by a storming performance for lower-alcohol Bud Light. Budweiser commands a premium over Foster’s and Carlsberg (11), sure, but it’s hardly high-end. It’s still on average over £1.50 cheaper per litre than Peroni (20), and 13p cheaper than Stella (1).

All of which suggests there isn’t a one-size-fits-all secret to making a booze brand work in 2018. If anything, this year’s winners have got to where they are by being more flexible than ever. Cheers!