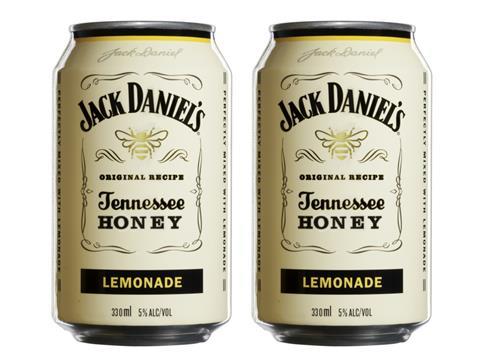 Jack Daniel’s has added a Tennessee Honey & Lemonade premix to its line-up.

Brand owner Bacardi Brown-Forman Brands (BBFB) launched the 330ml can, priced at £2.20, in selected Tesco stores earlier this month. From today (11 November) it will be available in Tesco stores nationwide.

Rolled out to the UK in August 2012, Jack Daniel’s Tennessee Honey has been one of the most successful spirits launches of recent years, this year achieving value sales growth of 53% to £28.3m [Nielsen 52 w/e 11 October 2014].

“We are thrilled to be extending our popular premix range with the launch of Jack Daniel’s Tennessee Honey & Lemonade,” said BBFB American whiskey trade marketing manager Crispin Stephens. “Jack Daniel’s Tennessee Honey has surpassed all expectations and we’re confident that this new variant will successfully tap into the consumer need for convenient spirit solutions and further drive category growth. Jack Daniel’s is already a premix market leader and whilst Tennessee Honey Lemonade will target similar occasions to Jack and Cola, it will continue to attract new consumers into the trademark.”