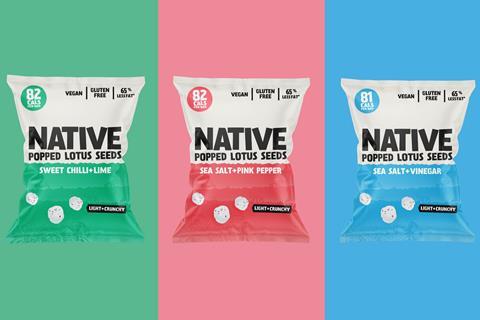 The flavours have been tweaked to ‘fit the mainstream’

Native Snacks has signed a deal with Burts Snacks to manufacture and distribute its snacks in the UK.

Native Snacks founder Charlie Bowker told The Grocer he was approached by Burts at the beginning of 2019 about a strategic partnership, and he “thought it was the right fit” for Native Snacks.

It will see the brand launch into Sainsbury’s, as part of the retailer’s Taste of The Future initiative, and Ocado.

The Popped Lotus Seeds snacks had previously been manufactured in India, but the partnership meant it could move to the UK. Production moved to Burts’ Leicester site this month.

Bowker explained that the move “made commercial sense” and that shipping raw materials in bulk to the UK, as opposed to finished bags, had “significantly improved operational efficiencies”.

Native Snacks has worked with Burts to tweak the flavours of its existing snack range to “fit the mainstream”.

The new flavours have gone into the brand’s existing stockists, such as Selfridges, Daylesford Organic, Sourced Market and As Nature Intended (rsp: £1.20/20g).

The funding would “allow Native Snacks to continue its exciting growth trajectory”, Bowker said, the two brands having agreed an “innovation pipeline” for the coming year.