The baby snack sector is booming, yet public health concerns are mounting over ‘alarming’ levels of sugar even in high-end products 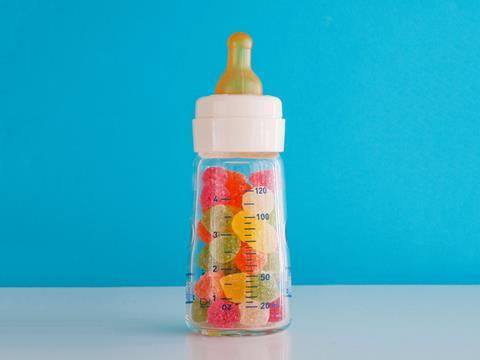 Britain’s babies and toddlers have been all but forgotten in the war on sugar. As regulators seek to reduce sugar in everything from soft drinks to children’s snacks (see the sugar levy on pop and Public Health England’s new campaign to limit kids’ snacking), our youngest have so far fallen under the radar.

There are still no official daily sugar intake guidelines for kids under four, despite the statistic that one in five children start school overweight or obese in England [PHE]. Kids aged four to 10 are getting half their maximum daily sugar intake (19g for those aged four to six; 24g for seven to 10-year-olds) from snacks and drinks, prompting PHE’s campaign for parents to give kids no more than two 100-calorie snacks a day.

looking for the print version? Download the PDF version of this report

As yet, babies and toddlers are not the subject of any similar campaigns. It’s badly needed, say some. Baby snacks are booming as demand for convenience from time-pressed parents grows. Sales have surged 14.5% to £73.4m on volumes up 4% [Nielsen 52 w/e 9 September 2017] as the overall infant & baby care sector has sunk 4.6% in value and 5.2% by volume [Kantar Worldpanel 52 w/e 8 October 2017].

So, will the baby & infant care sector be the next front in the war on sugar? Given that many of the biggest babyfood brands are marketed on health grounds, are snacks really that bad? And why is the wider sector, which has put £67.8m less through the tills in the past year, struggling?

Change is coming in early years nutrition. The focus of PHE’s reduction and reformulation programme will this year move to consider baby, weaning and toddler foods. The Scientific Advisory Committee on Nutrition (SACN) has recently closed a consultation on feeding in the first year of life, and future work will include a review of infant feeding from 12 to 60 months.

It’s about time, according to Philipp von Jagow, MD of Britain’s biggest baby snacking brand, Organix [Nielsen]. “Nutrition, health, sugar and salt remain hot topics within the wider market but within infant snacking there’s been an alarming reversal,” says von Jagow. “High growth has attracted new players. This in turn has seen taste and speed to market put ahead of nutritional standards, clarity of claims and ingredients. More than a third of foods within the UK infant snacking category now contain either added salt, added refined sugar or unnecessary ingredients such as flavourings.”

Trouble is, ask five brands what constitutes healthy eating and it’s likely you’ll get five different answers. Even some Organix products such as Soft Oaty Bars contain 120 calories a portion, falling outside PHE’s 100 calorie guideline for kids aged four and above. (Organix is looking to reduce portion sizes but stresses that 100 calories does not “necessarily mean a nutritious snack”.) 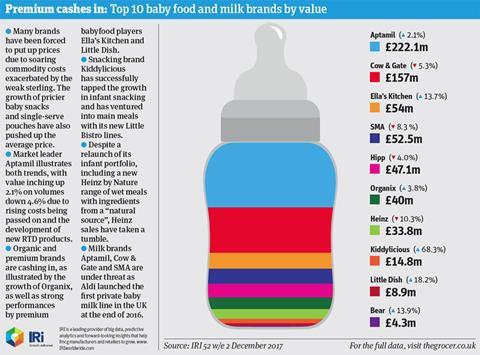 None of the big players say they add refined sugar to their products, yet some have come under fire for naturally occurring fruit sugars.

Last July, Britain’s leading babyfood brand Ella’s Kitchen faced criticism over its sugar content following a Channel 4 investigation. The Daily Mail ran with a headline claiming the brand’s products contained up to five teaspoons of sugar a packet and stated: ‘While its red pepper, sweet potato and apple pouch sounds like a vegetable product, it actually contains 78% apple purée.’

NPD from Heinz, which recently relaunched its entire infant portfolio with a new range of Heinz By Nature wet meals ‘prepared with ingredients from a natural source’, includes Minions Heinz Fruitz - fruit pouches with up to 11.5g per 100g. All these brands make the distinction that the sugar in their products is naturally occurring and derived from fruit, rather than added refined sugar.

The taxman, at least, agrees with this distinction - only soft drinks containing added sugar will be taxable under the sugar levy that will be enforced in April. The NHS also excludes natural sugar from fruit, for example, from its definition of ‘free sugars’ - the ones it advises people to avoid.

This thinking is behind the growing number of “organic” parents, a trend identified by children and family research agency Giraffe Insights. These typically high-income parents are convinced by the power of “natural” products, even if they naturally contain fairly high sugar levels. But a growing number of babyfood brands are calling for the industry to be clearer on all sugars. “Transparency is still very much an issue,” says Tom Redwood, founder of ‘balanced, vegetable-led’ babyfood brand Babease.

“Parents are still looking for healthy, convenient ways to feed their little ones but learning about the high levels of sugar in most babyfoods is alarming. The supermarkets need to broaden their offerings by making room for smaller brands that reflect the growing awareness and preferences of their customers.”

That’s not to say the retailers are doing nothing. Tesco and the Co-op have partnered with PHE for its current children’s snacking campaign, and both have pledged to make it easier for parents to choose healthier snacks.

The convenience channel is a key opportunity, says Emma Fox, brand manager for Ella’s Kitchen at RH Amar (the brand’s distributor in wholesale and convenience). She says 60% of parents with kids aged five and under regularly buy groceries at c-stores, compared with 49% of the wider population, with 56% of parents saying they want a wider selection of baby and toddler food in c-stores.

“The impulse channel continues to outperform the market average in babyfood, with value sales up 8.2% over the last year, while Ella’s Kitchen is now the number one brand in impulse with a 37% share of all sales and growing by 46%,” says Fox, citing IRI data for the year to 18 March 2017.

This, in turn, is driving growth in premium, single-serve pouched formats, she adds. “By contrast, sales of jarred babyfood continue to fall significantly,” she says, pointing out that the growing space convenience retailers are giving baby snacks is helping to drive growth. “Positioning these snacks near the till point can be a great way to increase impulse sales.”

According to our IRI data [52 w/e 2 December 2017], Ella’s Kitchen has delivered the greatest absolute gain of any babyfood brand, up £6.5m (13.7%). It is closely followed by snacking brand Kiddylicious, which has put an extra £6m (68.3%) through the tills thanks to a raft of NPD including strawberry wafers, lentil straws, cheesy straws and coconut rolls.

“Last year snacking category sales increased by 13.4% and Kiddylicious was the main driver of this growth,” says commercial director Neil Mather. “We have been responsible for 75% of the growth in the category.”

Growth in snacks and pouches - the preferred format for higher-end brands such as Ella’s Kitchen and Annabel Karmel - is having another effect. Because such products typically carry a significant premium, their growing presence in retailers is a significant contributor to the 5.2% rise in average prices the overall babyfood and snacking sector has seen in the past year [IRI]. (Whether this can continue in the age of growing environmental awareness is up for debate, though, as these packs are tricky to recycle.) 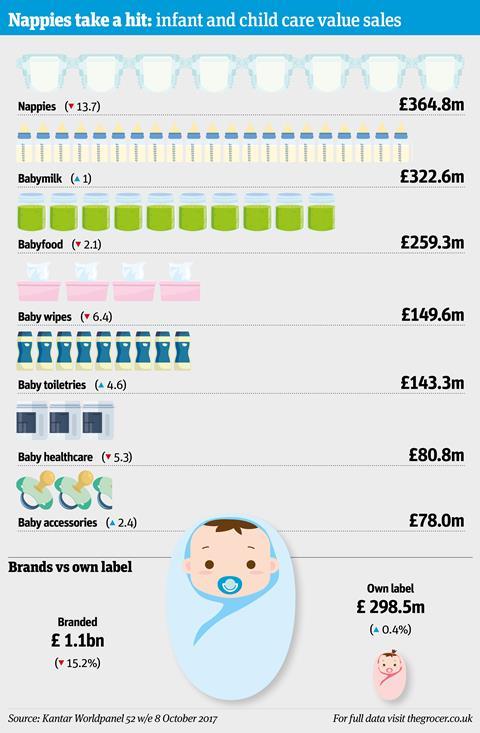 Rising demand for convenient formats is also helping to push up prices in baby milk formula, which saw inflation of 6.4% last year [Nielsen]. “Parents are choosing to pay more for premium products and also convenient formats that can be opened and used with one hand - very helpful when you’re holding a baby, as many people will be,” says Roz Davies, head of category development at Danone Early Life Nutrition, whose brands include Aptamil and Cow & Gate.

That’s why Danone extended its Aptamil Profutura range to include follow-on milk in 200ml bottles in 2017.

Meanwhile, Hipp Organic, which is planning a complete relaunch in 2018, also focused NPD on ready-to-drink formats including follow-on and growing up milks in 250ml bottles and 90ml bottles with teats, exclusive to Boots.

Of course, NPD and format innovation are not the only driving force behind rising prices. The sterling’s weakness following the Brexit vote is pushing up costs for suppliers, who are also contending with squeezed supplies of key commodities, particularly milk and certain fruit and veg.

Not that everyone is passing these cost rises on by simply hiking prices. “We have absorbed a profit loss of over 20% since Brexit as a business but we have passed on no price increases to customers,” says Mark Salter, founder of halal babyfood brand For Aisha, which has seen sales almost double in the past year [Nielsen]. “The growth will increase, as 2018 will be a strong year of NPD.”

There’s another factor keeping a lid on prices: the discounters. In early 2017, Aldi’s Mamia lineup overtook Asda’s Little Angels to become Britain’s bestselling own-label baby range [Kantar], driven by its rapid expansion to include everything from nappies to infant formula (which sells for almost half of comparable Aptamil lines). Further expansion into toiletries is on the cards.

“More and more parents are realising that they do not need to pay over the odds for high-quality infant care products,” says Aldi MD of corporate buying Julie Ashfield. “Our nappy sales are underpinned by our customers’ trust in and loyalty to Mamia, which has resulted in it becoming the UK’s largest own label nappy brand.”

Mamia’s growth has also been driven by its organic babyfood pouches, selling for almost a third of the price of branded equivalents. Even if the sugar police and the Daily Mail haven’t taken the wind out of babyfood brands’ sales, Aldi just might.

Innovations in infant care: Click or tap on the images below to read more