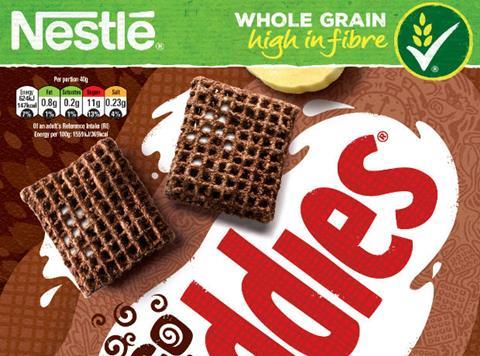 Nestlé has announced its Cereal Partners breakfast cereals in the UK will carry the Department of Health’s colour-coded traffic lights labelling from next month, with a full rollout to be completed by early 2018.

The move comes amid criticism from campaigners about companies shunning the front-of-pack labels, with the accusation they were ‘hiding’ the levels of sugar in their products.

Nestlé said it had always been its intention to sign up to the scheme, which is already used on wholly owned Nestlé products.

The Cereal Partners products include brands such as Shredded Wheat, Shreddies and Cheerios.

Earlier this year, it was announced that Nestlé breakfast cereals would see a reduction of a further 10% in average sugar content across the range by the end of 2018, in addition to the 15% reduction already achieved since 2010.

However Nestlé, along with Coca-Cola, Mars, Mondelez, PepsiCo and Unilever, is also pushing for a dramatic makeover of the existing traffic light hybrid scheme, which will point consumers to food and drink that comes in smaller portions.

Talks are continuing between the companies who are planning an alternative system, which, if successful, would allow some products currently branded with red lights to get an amber warning.

“We are proud to offer consumers nutritious and tasty cereals to enjoy every day. We have provided consumers with clear nutritional information in a monochrome format on front of pack for many years,” said UK regional vice president of Cereal Partners Worldwide Gharry Eccles,

“The decision by CPW to adopt colour-coded labelling in the UK aligns the Nestlé cereals range with what has become the common UK labelling scheme. It is also in line with other Nestlé products in this market, providing consumers with a consistent approach to nutrition labelling in the UK.”

Nestlé UK & Ireland CEO Stefano Agostini added: “Nestlé welcomes Cereal Partners Worldwide’s decision to adopt colour-coded labelling on its breakfast cereals sold in the UK. Nestlé UK has been a long-standing supporter of the colour-coded nutrition labelling scheme ever since 2013 when it was adopted on Nestlé wholly owned products. It has always been Nestlé’s ambition to see the UK government scheme on all Nestlé branded products in the UK.”