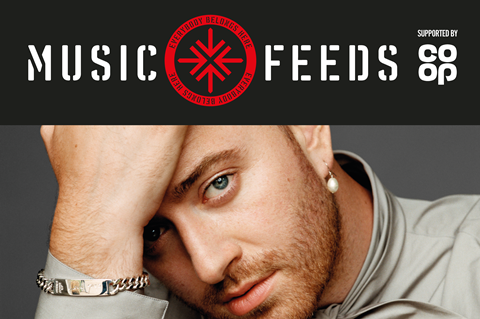 All net profits will be donated to FareShare, Help Musicians and Stagehand

The Co-op has organised a virtual music festival that will host 40 international artists, including Sam Smith, to raise funds and fight food poverty.

The two-day event Music Feeds, which is being co-presented by ethical music events promoter Everybody Belongs Here, will run on 28 and 29 January and will also see Blossoms, Fontaines D.C., Newton Faulkner and Flogging Molly perform.

All net profits from ticket sales will be donated to FareShare, as well as Help Musicians and Stagehand, who care for musicians and live production workers during times of crisis.

The Co-op is also donating a total of £1m, which will be spread among the three charities.

“Hunger knows no borders, and neither should our response,” said Co-op Food CEO Jo Whitfield.

“All year round, Co-op works to tackle food hunger and we’re thrilled to be uniting with outstanding musicians from across the world to turn up the volume on the issue.

“The pandemic has brought a sharper focus on issues such as food poverty and many in the music industry have seen their livelihoods disappear overnight because of lockdown restrictions.

“It’s right that we should lend our support and co-operate with musicians to raise awareness and raise funds for such vital causes.”

Co-op has heavily campaigned to raise awareness of food poverty and was one of the first signatories to Marcus Rashford’s new Food Insecurity Taskforce.

Co-op and Rashford first joined forces to help tackle the issue back in summer 2020 when the footballer starred in the retailer’s television advert to help raise funds for the food charity FareShare.