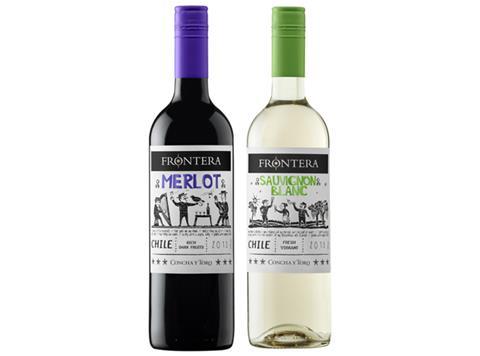 Concha y Toro has unveiled the new look of its Chilean wine brand Frontera ahead of a major push in the UK.

The company, which revealed its plans to develop the hero wine range and ‘next generation’ products to The Grocer in January, will launch four varietals – Merlot, Sauvignon Blanc, Cabernet Sauvignon and Pinot Grigio – into Tesco and Asda in March (rsp: £6.99). Two more lines, a rosé and a Chardonnay, will be released later in the year.

The new look is a radical departure from the brand’s previous classic style and aims to boost its appeal to affluent young ‘millennial’ consumers.  It is based on graphic woodcut and calligraphy designs from traditional Chilean folk poems, ‘Lira Popular’, and has a new tagline, ‘Grapes with magical roots’.

“New labelling will raise awareness of the genuine Chilean heritage which the brand taps into and the fun personality of the product, making it stand out as an exciting affordable wine,” Herrig said.