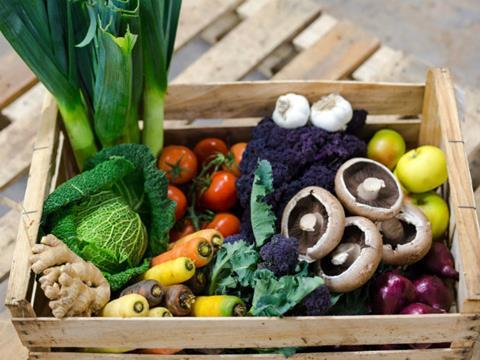 Spend on organic food and drink was up 6% on 2016, according to a new report by the Soil Association’

Organic sales hit an all-time high of £2.2bn in 2017, though supermarkets continued to miss out as £1 in every £7 spent on organic went to independent retailers.

Spend on organic food and drink was up 6% on 2016 and surpassed the previous record for organic sales of £2.1bn set in 2008, compared to a 2% rise in non-organic food sales over the same period, according to the Soil Association’s Organic Market 2018 report in partnership with Nielsen.

Chilled foods and deli products saw the single biggest increase at 21.3% of value sales, according to the report. Fresh produce documented the highest value rise, adding in excess of £20m as the second-largest sector in organic.

Meanwhile, dairy products continued to claim the biggest share of the organic market, approaching 29% of all organic sales.

The report also highlighted the growing popularity of organic wines, sales of which increased by more than 8% last year. The rise was bolstered by supermarkets expanding ranges - such as the Co-op’s launch of an organic Lebanese wine, Côteaux les Cèdres, in December last year.

The Soil Association attributed the rises to an increasingly health-conscious society, with health a “key motivator for buying organic”. Consumers were also becoming more concerned with the provenance and traceability of food, due to the media’s coverage of food safety issues such as the fipronil egg scandal, the 2 Sisters food hygiene scare and supermarkets using ‘fake farm’ names to market products, it claimed.

Supermarkets still accounted for the lion’s share of organic sales, achieving £1.49bn in 2017. However, while organic sales in supermarkets grew faster than in 2016, at 4.2%, they were still lagging behind in the growth of home delivery agents, independent retailers and foodservice, which achieved 9.5%, 9.7% and 10.2% growth respectively, the report revealed.

Sainsbury’s, Tesco and Waitrose dominated the organic market in the mults, accounting for almost 70% of supermarket organic sales - although that figure was down on 2016 when they accounted for more than 80%.

While larger retailers had organic lines available in store, many organic options were not available online, the report warned. The lack of availability had created a niche filled by specialist online retailers such as Ocado and Amazon Fresh, catering to consumers looking for convenience. The Soil Association predicted such services could double sales to account for 25% of the organic market in the near future.

“We know how important organic is to our customers, and that’s why we’ve spent the last year expanding our ranges of organic to meet rising demand,” said Rose Price, head buyer at Ocado.

“We are hoping to launch over 100 new organic products during 2018. We see no end to the strong growth in organic, as the market has been buoyed by a new generation of shoppers looking to spend their earnings on food and drink that is not only better for them, but also for animal welfare and the environment.”