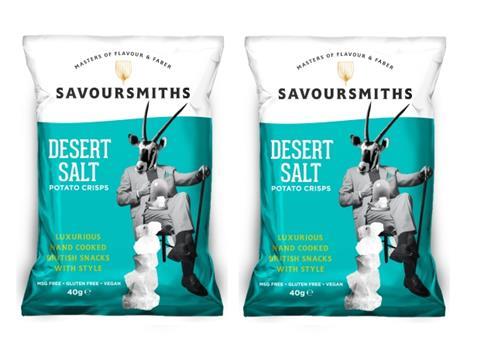 Savoursmiths is expanding its range of posh crisps with a new Desert Salt flavour.

The crisps, poised to hit shelves from December in 40g and 150g packs, are made with naturally harvested, sun-dried salt from the Kalahari Desert in Southern Africa and potatoes harvested from the supplier’s farm in Cambridgeshire.

The sourcing and sun-dried method created “an exceptional taste, enhancing and enriching flavours”, said the brand. “Our crisps are fuelled by the local fields and we are involved in the process from start to finish. Everything we do is made from scratch and we influence what is sown, when it is harvested and how our crisps get prepared.”

Further NPD from Savoursmiths would likely see release over the coming year, a spokeswoman told The Grocer.