Food Unwrapped looks at whether squid could stand in for cod 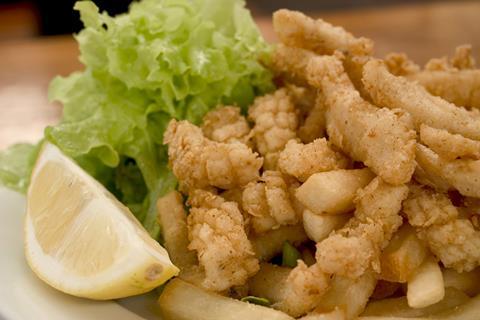 Fish & chips are under threat. As climate change warms our seas, traditional fish species such as cod and haddock are moving on and warmer water species like squid are moving in.

Squid & chips it is, then. But will Brits be happy about this substitution for their fish supper? Food Unwrapped (Channel 4, 23 September, 8.30pm) attempted to answer that question, travelling to Thailand - one of the largest exporting nations of squid - to “find out what we’re in for”.

First stop for presenter Jimmy Doherty was a fast food chain in Bangkok, which has turned ‘squid & chips’ into the country’s latest culinary craze. “The Thais just can’t get enough of the stuff,” he mused.

Next, Doherty boarded a fishing vessel to explore issues around sustainability. In recent years, the EU has threatened to ban imports of Thai seafood because of concerns over unsustainable fishing policies. Recently, though, the Thai government has tightened controls. Not that it really matters, given the seas around the UK could soon be packed full of sustainable squid.

So back to Britain, where Doherty took over a fish & chip shop in Brighton to find out whether fried squid on a stick could really become hit. “Delicious,” said one member of the public. “Actually it’s really good,” exclaimed another. They were less keen about the idea of swapping it for traditional cod, though (just one or two said they would).

And so you have it. Not the most scientific of studies, but an interesting glimpse into the future of our fish & chip shops all the same.